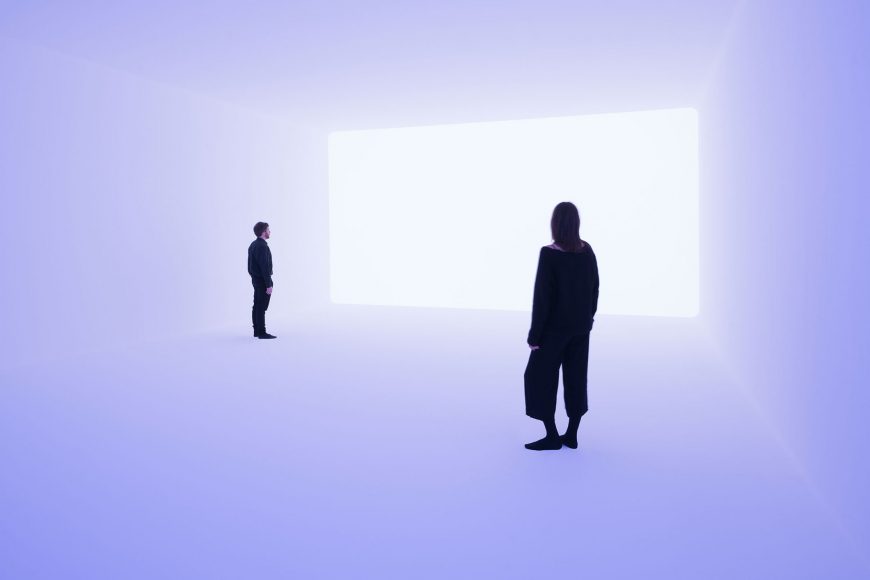 James Turrell and the Ganzfeld Effect

James Turrell and the Ganzfeld Effect

The event will be in German.

There are no tickets left for this event (free of charge). However, it is still worthwhile to ask at the box office on the evening of the event. Unclaimed tickets are given to people from the waiting list approximately 15 minutes before the event starts.

“Seeing yourself see,“ is how James Turrell describes the experience of his Ganzfeld pieces. In the diffuse light field of his installation Ganzfeld “Aural,” which will be on display at the Jewish Museum Berlin until October 6, 2019, the boundaries of space disappear – its dimensions seem impossible to grasp and virtually endless. A sense of disorientation sets in and at the same time a peculiar floating feeling. A conversation evening co-organized by the Schering Stiftung and the Jewish Museum Berlin looks at the Ganzfeld effect from two different perspectives.

In the 1960s, James Turrell was one of the first artists to stage the medium of light without a visible connection to its light source, turning immaterial light into both a material and an autonomous medium of design. Turrell’s works have their origin in the Art & Technology program of the University of California and the Los Angeles County Museum, where artists and scientists have studied the Ganzfeld in the context of further developing space travel.

The Ganzfeld effect was discovered as early as the 1930s in the field of perceptual psychology. Ganzfeld describes a completely homogeneous field filling one’e entire visual field. The observer experiences a feeling of disorientation, an altered perception of colors and brightness. Big snow fields, dense fog, or the darkness of night are natural Ganzfelder. Through his choice of light intensity and the positioning of light sources, Turrell provokes the Ganzfeld effect by removing any visual reference points for the observer’s perception of space. In his installation Ganzfeld “Aural,” intermittent strobe lights additionally confuse the senses.

As part of an interdisciplinary conversation evening co-organized by the Jewish Museum Berlin and the Schering Stiftung, Margarete Pratschke, Visiting Professor of Modern and Contemporary Art and Visual History at HU Berlin, will provide insight into the Art & Technology program and put Turrell’s works and light art into the scientific and historical context of their creation. Ernst Pöppel, former director of the Institute for Medical Psychology at LMU Munich, in his lecture “Ein Blick in die Augen und das Gehirn – beim Sehen” (Looking into the Eyes and the Brain – while Seeing) will explain the physiological and psychological foundations of perceptual effects.

Gregor H. Lersch, director of temporary exhibitions at the Jewish Museum Berlin, will moderate the evening and give an introduction to the installation Ganzfeld “Aural”.

Former Director of the Institute for Medical Psychology, University of Munich (LMU)

Ernst Pöppel studied psychology and biology in Freiburg and Innsbruck. He worked on vision and temporal perception at various Max Planck Institutes and at MIT in Cambridge, MA (USA). At LMU Munich, he directed the Institute for Medical Psychology and the Human Science Center (HWZ). For years, he has been Visiting Professor at Peking University. His staff members have come from more than 40 countries. His working motto is: “Scientists are natural ambassadors.”

Margarete Pratschke is an art and visual historian and studies the history of images in science and technology as well as the visual culture of the digital present. After completing her dissertation at HU Berlin, she was a postdoc at ETH Zurich and eikones in Basel. Since 2017, she has worked at the Department of Art and Visual History at HU Berlin, currently as Visiting Professor of Modern and Contemporary Art and Visual History. In 2016, she received the Caroline von Humboldt Prize for her studies of the Ganzfeld experiments at the Berlin Palace.