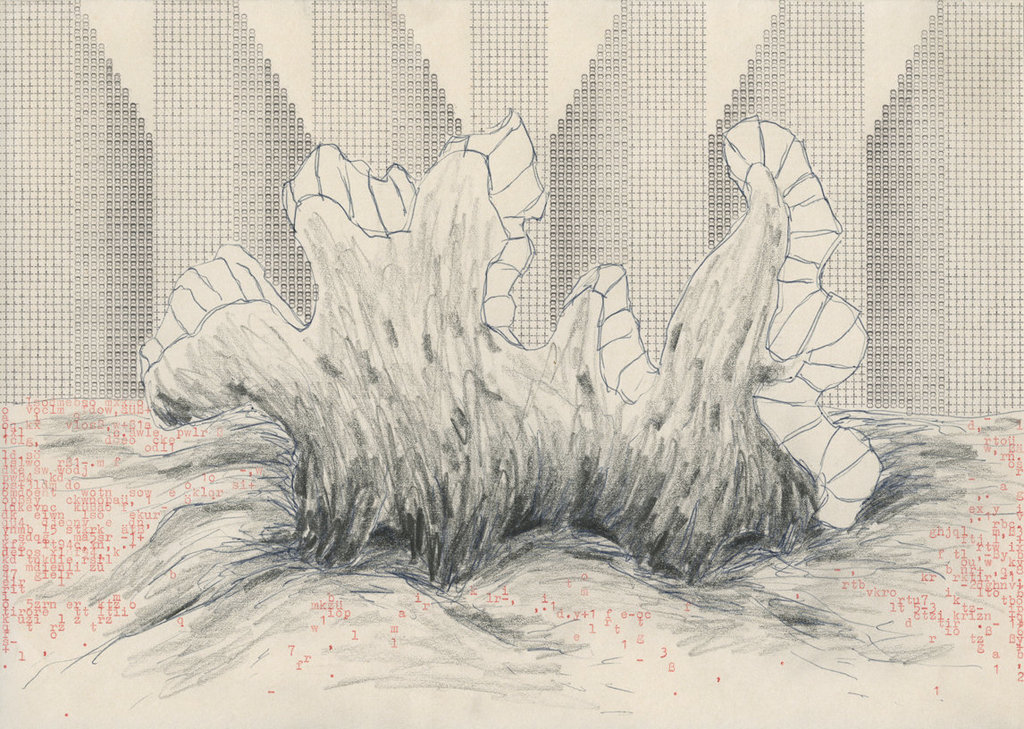 The German artist Ruth Wolf-Rehfeldt is best known for her typewriter graphics, which she created in Berlin (East) between 1972 and 1989/90. The sheet, which was acquired for the collection of the Schering Stiftung in 2022, is already part of the Typewritings group of works. Specifically, it is an untitled work from the series of “Concrete Architecture,” which began in the 1970s and in which the artist dealt with spatiality.

This work, unique in the artist’s ouevre, is a typewriting extended by a drawing. On it, an organic structure can be seen growing out of the ground against a backdrop of seven vertically towering architectural constructions lined up side by side, reminiscent of the blocky appearance of socialist buildings. The blocks of houses in the background, on the other hand, are typewritten, as are the small red letters surrounding the structure, whose arrangement makes them look like a crowd of onlooking individuals streaming in from all sides. The charm of the depiction lies on the one hand in the juxtaposition of the drawn motif and the strict as well as free letter formations arranged into a pattern. On the other hand, the organic structure demonstrates its power by appearing as a natural, organic contrast to the built environment that surrounds it. In this work, the artist thus succeeds in demonstrating and artistically exploring the field of tension between nature, architecture and man.

Ruth Wolf-Rehfeldt was born in Wurzen, Saxony, in 1932. After completing an apprenticeship as an industrial clerk, she moved to Berlin in 1950. From there she operated within the international Mail Art network from 1974 to 1989/90. The artist lives in Berlin. She was honored in 2022 with the Hannah Höch Prize of the City of Berlin for her life’s work.