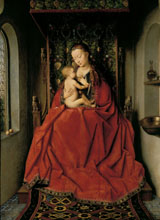 The Lucca Madonna (1435) by the Dutch painter Jan van Eyck makes a solo appearance at the Städel Museum in Frankfurt/Main. Since first becoming known, the painting of the Madonna is seen as a masterpiece of Jan van Eyck. None of his other paintings impart such an immediate intimacy between the viewer and the portrayed figures as does the Lucca Madonna, named after a previous owner of the painting.

With his incomparable painting technique and brilliant visual solutions, Jan van Eyck ranks among the most important fifteenth-century artists of the Netherlands. From 1425 until his death in 1441, he was in the employ of Philip the Good, Duke of Burgundy.

The Lucca Madonna, today owned by the Städel Museum, is here presented in a totally new fashion—namely by taking into account various disciplines such as art history, science of the image, sociology and the natural sciences. Wall-to-wall “mind maps” explain, among other things, the artist’s objectives as well as the revolutionary innovations regarding image structure, design and technique.

This exhibition is the first of a new series entitled “Focus on: …,” which is exclusively supported by the Schering Stiftung. In a total of nine exhibits, nine masterpieces from the distinguished collection of the Städel Museum will be presented to the public under a variety of scientific aspects. On November 7, 2006, the series will continue with “Focus on: Johannes Verspronck, Portrait of a Lady in an Armchair (ca. 1642-45).”