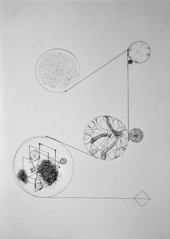 The Dutch interdisciplinary artist and composer William Engelen will have his first comprehensive solo exhibition in Berlin. From September 10 until November 6, 2011, the Haus am Waldsee will present the entire range of his work, including graphic scores, sculptures and audio installations.

William Engelen’s sound works are defined by their variable relationships between the visual, the acoustic and the surrounding space. His oeuvre brilliantly combines visual art, architecture, music, performance, installation, sculpture and composition. This results in mixed musical forms that are difficult to reproduce because they are site-specific and, for the most part, perishable. The artist succeeds in transforming his environment into scores that themselves generate images of music. This kind of “appropriation of the world” represents a singular and unique approach in the contemporary art world. William Engelen’s consistently interdisciplinary works have motivated the Schering Stiftung not only to support this long overdue solo exhibition in Berlin; as early as 2009, the Foundation also acquired a series of Engelen’s scores for the collection of the Museum of Prints and Drawings of the Berlin State Museums.

William Engelen’s graphic scores are partly based on diaries and told stories. They are used by musicians as a basis for performances which will also be presented at the exhibition. In these compositions, Engelen does not start from notes and beats; he rather composes with sounds and noises, objects and space, which results in something multi-media. By allowing the musicians to have a creative say, his graphic scores at the same time compose human activity. The spaces that Engelen works with are not abstract architectural spaces, but always culturally determined spaces. “His works unify the incommensurable: the static and the dynamic, being and transience, space and time.”*

The show is curated by Dr. Katja Blomberg, director of the Haus am Waldsee. An exhibition catalogue (in German and English) is available from Verlag Walther König, € 16.80.

The exhibition is supported by the German Capital Culture Fund, the Schering Stiftung and Freunde und Förderer des Hauses am Waldsee e.V.