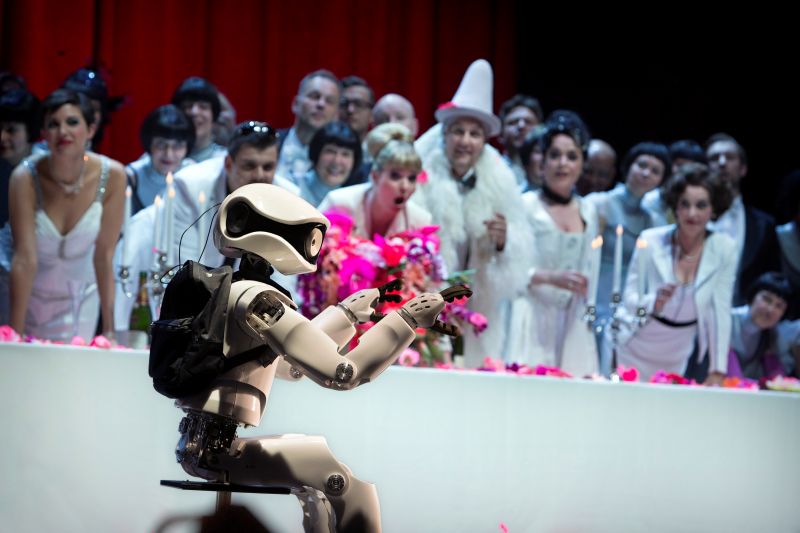 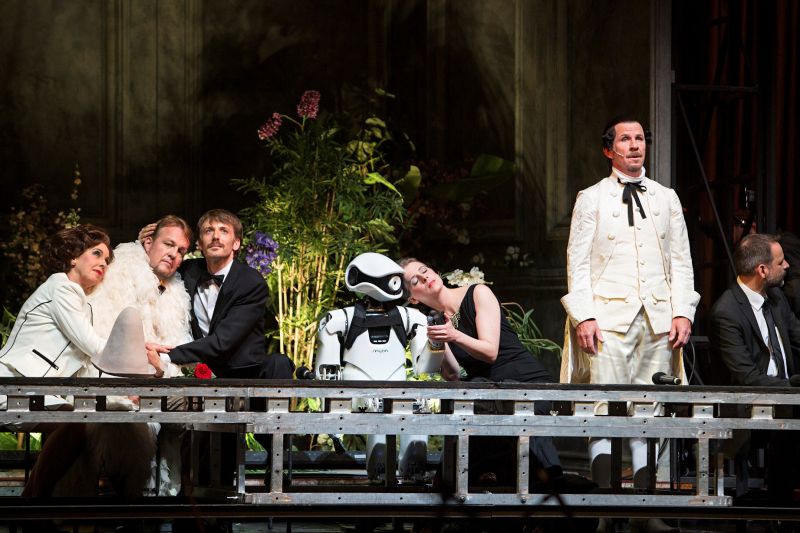 Of Humans and Machines. An Exploration of and through Opera

Of Humans and Machines. An Exploration of and through Opera

More information on the production is available here

What makes a human being human? How can an object or a “primitive being” be formed to become human? Where is the line between man and machine? In cooperation with the Neurorobotics Research Laboratory at the Beuth University of Applied Sciences Berlin and the Komische Oper Berlin, the German-British performance group Gob Squad has searched for possible answers to these questions. For eighteen months, they practiced with robot Myon and together explored the world of opera. The results can be seen in the production “My Square Lady”, which will première at the Komische Oper Berlin on June 21, 2015. Starring: robot Myon!

Taking their cues from George Bernhard Shaw’s play “Pygmalion” and Frederick Loewe’s musical “My Fair Lady”, the internationally renowned German-British performance collective Gob Squad, the scientist Manfred Hild, and the Komische Oper Berlin set out on an exciting voyage of discovery with the humanoid robot Myon. Programmed as a self-learning robot since its “birth,” Myon is to explore opera – “the power plant of emotion” – in all its facets and learn what it means to feel, express and elicit human emotions. To this end, the performers and the scientists have engaged in an eighteen-month training program with the robot. Myon is capable of perceiving – and recalling – when a human being tenses up or relaxes in certain situations: such behavioral mechanisms are recorded into its memory and can be subsequently retrieved. Whether Myon is cut out to be a human being or an opera star will have to be seen at the end of the season on the big stage.

The opera production “My Square Lady” is unusual in every respect: casting a robot as the protagonist is not the only revolutionary aspect; so is the willingness of an opera house, including all its departments as well as its conductor, to spend eighteen months pursuing new performance approaches with an off-theater group. The additional fact that the opera staff become subjects of a scientific experiment while at the same time training and coaching a robot makes possible new insights into “individual systems” and inspired the Schering Stiftung to support the project.

My Square Lady: Of Humans and Machines. An Exploration of and through Opera

A cooperation of the Komische Oper Berlin with the Neurorobotics Research Laboratory at the Beuth University of Applied Sciences Berlin and Gob Squad, supported through the Doppelpass fund of the German Federal Cultural Foundation and by the Schering Stiftung, presented by taz.die tageszeitung and zitty Berlin.