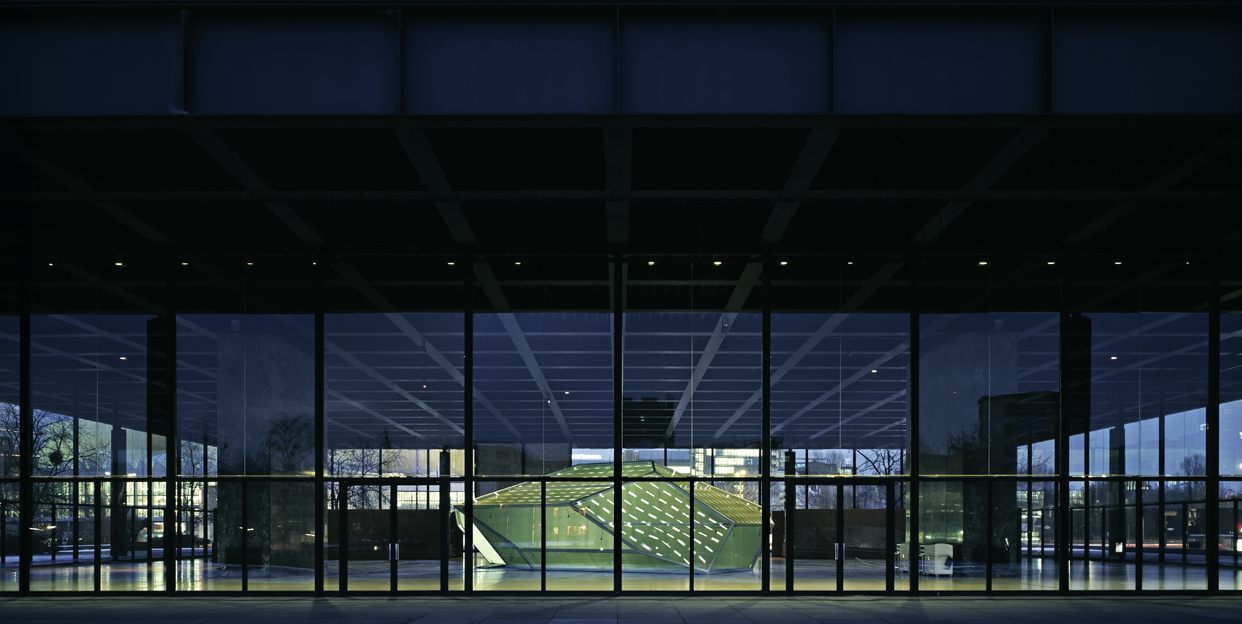 The upper hall of the New National Gallery was a particularly appealing location for visual artist and musician Carsten Nicolai for an experiment that not only takes him into the liminal zone between art and music, but also places him at the interface to science.

Nicolai has conceived of a walk-through sculpture for the glass hall of the Mies van der Rohe building, which serves as acoustic body, resonating space and projection surface all at once. The electronic music composed by Carsten Nicolai is visualized in real time by laser, with the translucent skin of the crystalline sculpture being a vehicle for both acoustic and optical events. The architectural body thus becomes a sound and light space that visitors can enter into, but that can also be perceived at a distance from the outside.

Since the mid-1990s, Carsten Nicolai, born in 1965 in Chemnitz, has developed a special approach to the connection between art and music, between visual and acoustic perception. In his experiments, Nicolai attempts to overcome separations between human sensory experiences and to transform natural scientific phenomena, such as sound and light frequencies, into events perceptible for the eyes and ears. “syn chron” represents the largest project to date in Nicolai’s endeavor to create a symbiosis between architecture, light and sound. This mobile architecture is a prototype that the artist has developed in cooperation with architects Finn Geipel and Giulia Andi, LIN and engineer Werner Sobek. Aside from brand-new laser technology, Nicolai experiments with the distinctive acoustic conditions within the crystalline space.

The “syn chron” project takes place as part of the “Musical Works by Visual Artists” performance series, which Freunde Guter Musik Berlin has realized in collaboration with the National Gallery Berlin since 1999 and, since 2002, with MaerzMusik festival of the Berliner Festspiele.