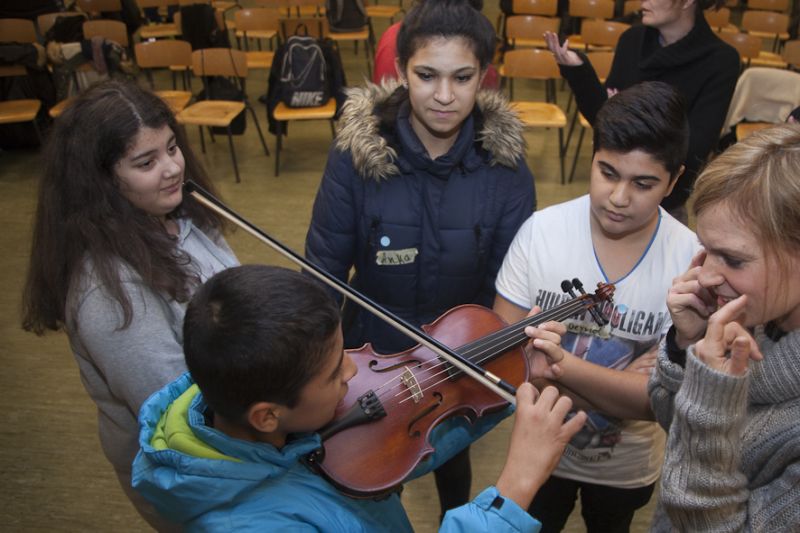 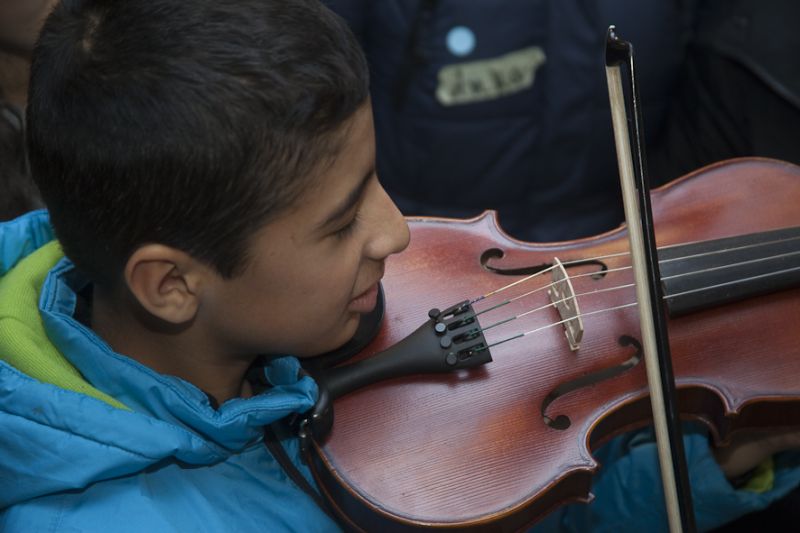 A carefree and happy childhood is not something that all children can take for granted. Having fled war and violence, many children and teenagers now living in Germany need to learn a new language, make new friends, and develop trust in a culture they are not familiar with. While the individual life situations of these young people may vary, “there is one thing we all understand – the language of music,” says the world-renowned pianist and conductor Daniel Barenboim who has received many awards for his social activities. Under his patronage and under the direction of the internationally known musicians Felix Krieger and Saleem Ashkar, refugee children and teenagers team up with local youth to form a youth symphony orchestra and a choir at the Al-Farabi Music Academy in Berlin.

The music academy has been a program of the German Children and Youth Foundation (2016-2018) and is now becoming a registered non-profit association (Al-Farabi  Musikakademie e.V.). It is named for the Persian-Turkish doctor, mathematician, philosopher, and music theorist Abu Nasr Mohammed Al-Farabi (born 870, died 950 in Damascus) and will initially be based at a school in Spandau.

At the Al-Farabi Music Academy, the currently 40 participants between the age of 12 and 20 receive free music instruction in groups, individual lessons, and together in the orchestra. The musical framework is undergirded by a pedagogical concept consisting of trips, workshops, skills trainings, and vacation activities. This way, the children and teenagers get to know their strengths and gain self-confidence. They feel welcome and recognized. “The orchestra is a space where wonderful friendships develop. Besides, you learn that it is important to listen to each other and feel with each other to achieve something together,” says Felix Krieger who had the idea for the program.

“In Syria I had music lessons several times a week after school and also played in an orchestra. For me, Al-Farabi is a piece of home in Germany,” says the 17-year-old Eyana from Damascus. Eyana now has the opportunity to play with other children – both refugee children and children who have grown up in Germany – in a youth symphony orchestra.

“The Al-Farabi Music Academy wants to be a positive symbol for integration in Germany and strengthen the children and teenagers both personally and prepare them for an increasingly diverse society,” says Hildegard Kiel, program director at the German Children and Youth Foundation.

The Schering Stiftung supports the Al-Farabi Music Academy, since its concept is unique in Germany. It is conceived as a long-term program, allowing both refugee minors and local children and teenagers to make music together. This intensive encounter between native and still foreign children creates a safe space for all where the children feel at home and, moreover, receive daily music training.

Invitation for Closing Concert on July 13, 2018