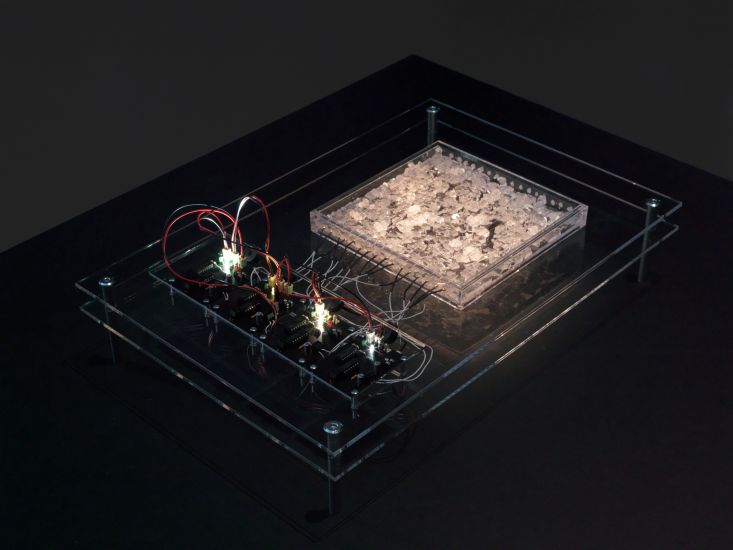 On Tuesday, November 8, 2011, at 6.30 p.m.,  Prof. Dr. Hans H. Diebner, Head of the Performative Science Project – Basic Research at the Interface Between Art and Science at the Institute for New Media (INM), Frankfurt, will give a public talk “Complexity Research Beyond Traditional Disciplines” at the Schering Stiftung. The lecture is related to the exhibtion „IRRATIONAL COMPUTING“ by artist Ralf Baecker, which is shown at the Schering Stiftung’s project Space until December 17, 2011.

It almost goes without saying that a lecture on complexity research should start out with an attempt at definition. But it becomes quickly apparent from both historical and contemporary attempts that this continues to be an unsatisfactory undertaking. Only the so-called algorithmic complexity theory, which holds some relevance in cryptography and computer science, offers a clear definition of complexity, which also has its problems, however.

Besides, algorithmic complexity is of little use in helping us understand cybernetic and natural complex systems, which are the focus of the lecture. In order to grasp the essence of complex systems, the lecture takes a historical approach and uses specific examples from which it will try to draw some generalizations. It will be shown that the class of systems we call complex systems entails a renunciation of the paradigms of classical, i.e. rationalist sciences. It might be justifiably argued that researching complex systems involves a kind of alchemy and a whiff of mysticism – one might even say irrationality –, though this is by no means meant in a pejorative sense. On this issue, the lecture will present vivid examples of complex ecological and physiological processes.

Historically, complexity research was preceded by general systems theory, which distanced itself markedly from classical science by taking its cue from the holistic approaches of vitalism. An important keyword is “contingency.” There was a search for methods in order to do justice to the experience of the lived-in world, namely that a complex dynamics could always have taken a different course, i.e. is contingent. This was a slap in the face for the repetition requirement of classical physics and the belief in the fundamental knowability of the dynamics of the universe. Sociologist and historian of science Andrew Pickering thus coined the term “ontological theater” for this new research method, i.e. a kind of research approach that recalls artistic-performative practices, of which the lecture will give many relevant examples.

At the same time, systems theory’s claim to universality has not held up, especially in the related field of cybernetics, which also included a scientification of philosophy and the arts. The lecture therefore will conclude with some critical comments on the dissolution of boundaries in cultural practices, which has most certainly been catalyzed by complexity research but also by the arts that have moved closer to the sciences.

With the lecture and the exhibition IRRATIONAL COMPUTING, the Schering Stiftung supports the dialogue between contemporary art and science. The lecture is public and free and will be held in German.

For further information about the exhibiton please click here.