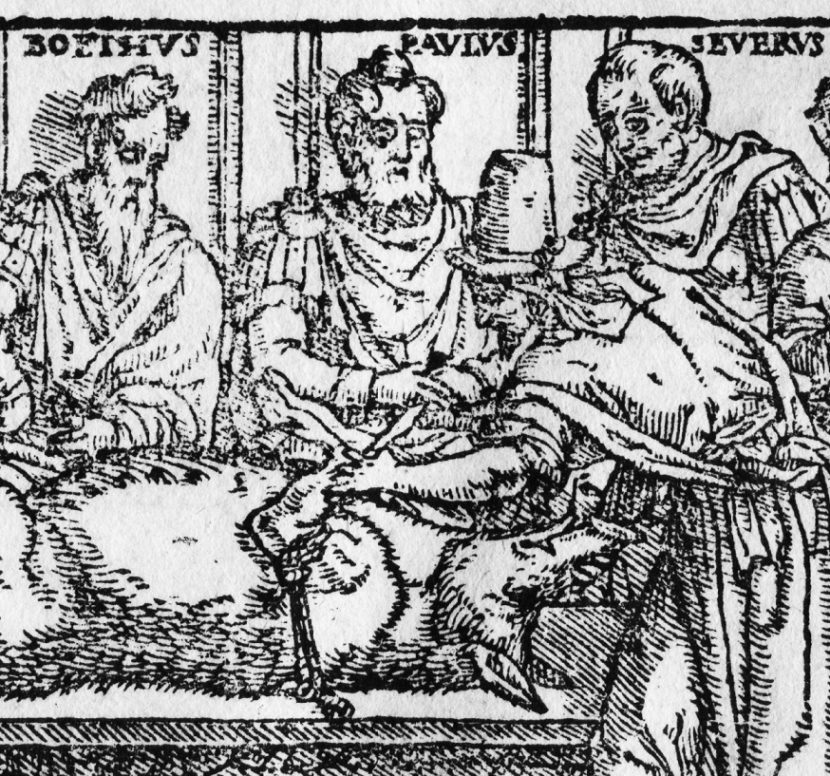 Galen as vivisector. Detail from the panel illlustration of the title page of the 9th Junta edition of Galen’s Works, Venice 1625.
Photo: (c) CMG 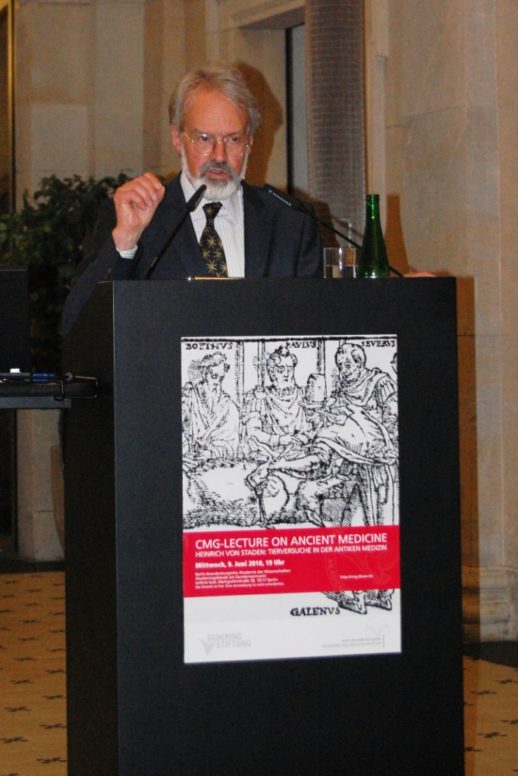 The working group of the “Corpus Medicorum Graecorum/Latinorum” at the Berlin-Brandenburg Academy of Sciences and Humanities (BBAW) invited to the 2nd “CMG Lecture on Ancient Medicine.” The lecture series aims to present selected topics in ancient medicine, and their current relevance, to a broader public. This year’s guest speaker was Prof. Dr. Heinrich von Staden, Princeton, who gave a talk about “Animal Experiments in Ancient Medicine”. The lecture was made possible by the Schering Stiftung.

Staden is a member of the American Philosophical Society and the Académie des Inscriptions et Belles Lettres at the Institut de France, as well as a corresponding member of the British Academy, the Finnish Academy, and the Academy in Göttingen. After receiving his Ph.D. from the University of Tübingen, he taught classics and comparative literature at Yale, before being appointed to the Institute for Advanced Study in Princeton in 1998. He was president of the International Federation of the Societies of Classical Studies and of the Society for Ancient Medicine and is considered to be one of the most important historians of ancient history of our time, outside of his specialty in ancient medical history.

The nature and extent of scientific experiments in ancient Greek and Roman science remains a disputed subject. Analyzing reports of animal experiments that were conducted by Greek biologists and doctors from the fourth century B.C. to the second century A.D., the lecture focussed on some of the more controversial aspects of this subject. It discussed the motivations of the ancient scientists, the purpose of their experiments, their methods and findings, and their selection of indigenous and exotic animal species for use in the experiments. It also looked at significant changes in the social conditions of the experiments, particularly the move from a long tradition of conducting such experiments in private to performing them in public space, often in front of a sizeable audience. Finally, the lecture also explored the limits, ethical and otherwise, of animal experiments in ancient times.

An introduction from a contemporary medical perspective was given by Prof. Dr. Hanfried Helmchen, member of the Bioscience/Medical Class of the BBAW and former managing director of the Psychiatric Clinic and Polyclinic of the Free University of Berlin.

The Schering Stiftung supported the CMG Lecture because of its objectives to foster public understanding of science and research and to promote the dialogue between science and society.