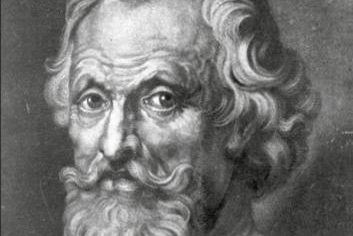 The presentation will be held in English.
Admission is free. Registration is not required.

Further information is available at: http://cmg.bbaw.de

A documentation film of the lecture will be published at:
http://cmg.bbaw.de/veranstaltungen/cmg-lecture-on-ancient-medicine

The long-term project “Galen of Pergamon. The Transmission, Interpretation and Completion of Ancient Medicine” at the Berlin-Brandenburg Academy of Sciences and Humanities invites you to the 4th “CMG Lecture on Ancient Medicine”. The lecture series aims to present selected topics in ancient medicine, and their current relevance, to a broader public. This year’s guest speaker will be Vivian Nutton, Member of the British Academy and the German Academy of Natural Scientists Leopoldina.

He was professor of ancient history of medicine at the Wellcome Trust Centre of the History of Medicine at University College London.

Nutton says about his lecture:
“Interest in the life of Galen of Pergamum has fluctuated even more than the reputation of his medicine. Renaissance biographers largely abandoned the legendary reconstructions of their medieval predecessors, but it was not until the late nineteenth century that non-medical scholars began to investigate his life in a wider social context. More recent discoveries, epigraphic, archaeological and textual, offer new opportunities for Galenic biography.”

The Schering Stiftung supports the CMG Lecture for the 3rd time because of its objectives to foster public understanding of science and research and to promote the dialogue between science and society.