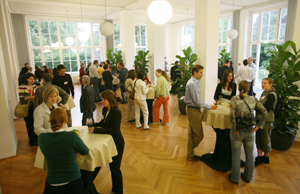 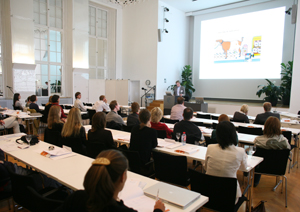 For many, it was a reunion with old friends, for others it was the first time they met the fellows and alumni of the Schering Stiftung and presented their projects to them.

The two-day Fellows Meeting offered a densely packed program: in four sessions, the current fellows presented the research projects that they carry out during their two-year fellowship period at renowned international institutes. Lectures by experienced scientists such as Professor Wolfgang Baumeister from the Max Planck Institute of Biochemistry in Martinsried or Professor Andreas Busch, Executive Director (Research) of Bayer Schering Pharma AG in Berlin, complemented the scientific program.

In a workshop entitled “Science & Ethics,” which the fellows had organized themselves, Dr. Felix Thiele from the European Academy opened the discussion with his lecture on “Science, Morality and the Ethics of Science.” During the subsequent group discussions, the participants focused on concrete ethical issues in their daily work such as honesty in dealing with scientific data, the question of first authorship and the dependence on letters of recommendations in a fellowship application. The inspired concluding discussion whose participants included not only Dr. Thiele, but additional panel chairs and guests such as Professor Bernd Groner from the Georg-Speyer-Haus in Frankfurt/Main and Dr. Patrick Hart from the British Council lasted well into the evening.

Rounding off the program, the poster party in the conservatory of the Harnack House – already a fixture of the biennial Fellows Meetings – provided the participants with another opportunity to deepen their intensive discussions.