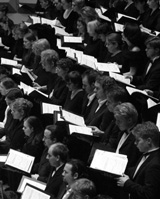 In 1789 in Vienna, Wolfgang Amadeus Mozart took into account the contemporary taste by writing a new orchestration for “The Messiah” by Georg Friedrich Händel, thus bringing a fresher note to the oratorio. Only shortly afterwards, between 1829 and 1835, Carl Friedrich Zelter worked on the Baroque piece to be able to perform it in Berlin.

Händel’s works were well-known and popular, but already at the end of the 18th century they could frequently no longer be performed in their original arrangements, since the spread of new instruments such as the clarinet made it difficult to put together an orchestra using the original instrumentation.

Zelter’s arrangement, which was presumed missing for many years after the Second World War together with the archive of the Sing-Akademie, will now be performed for the first time—after its première in the early 19th century.

The archive of the Berlin Sing-Akademie, rediscovered in the National Library of the Ukraine in Kiev, is a musico-historical treasure of international importance. Among the more than five thousand hand-written scores and old prints, twenty-one unknown passions by Carl Philipp Emanuel Bach alone await their revival. We are delighted that our contribution enables the public to share in these discoveries. Already last year, the Schering Stiftung made possible the performance of the St. John’s Passion of 1772, while the St. Matthew’s Passion by Carl Philipp Emanuel Bach, dating from 1785, could be presented to the public after more than two hundred years on April 4, 2004.