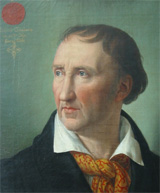 Johann Gottfried Schadow – A Complete Catalogue of His Drawings

Johann Gottfried Schadow – A Complete Catalogue of His Drawings

Commissioned by the Berlin Academy of Art and the German Society for Art History, the first complete catalogue of the drawings of Johann Gottfried Schadow, which are preserved in different collections, was compiled by art historians Sibylle Badstübner-Gröger, Claudia Czok and Jutta von Simson. The three-volume work, edited by Rüdiger Becksmann and supported by the Schering Stiftung, will be presented to the public on February 17, 2006, as part of a “Little Schadow Celebration” at the Berlin Academy of Art.

Born in Berlin in 1764, Johann Gottfried Schadow at the age of 15 starts his apprenticeship as a sculptor in the Royal Sculptor’s Workshop under the direction of Jan Pieter Antoon Tassaert, while at the same time attending the Art Academy. A prolonged study trip takes him to Rome for two years, where he studies classical works of art and cultivates the company of important artists such as Antonia Canova. Upon his return to Berlin, he succeeds Tassaert in 1788 to become director of the Royal Sculptor’s Workshop. During his directorship, he closely collaborates with Carl Gotthold Langhans (director of the Royal Office of Works). From 1815 until his death in 1850, Schadow serves as director of the Berlin Academy of Art.

He favors a naturalistic/realistic representation, which stands in sharp contrast to the then preferred mode of representation, i.e. an idealized representation deriving from classical antiquity. For that he is criticized by famous contemporaries such as Goethe and Schlegel. Friedrich Wilhelm III even forbids the erection of one of Schadow’s best-known sculptures, the “Princesses Luise and Friederike” (1795/97), because of its overly naturalistic depiction of his wife.

In 1830, Schadow is awarded an honorary doctorate by the Philosophical Faculty in Berlin. Due to an eye problem, Schadow has to limit himself to drawing after 1836.

Schadow’s masterpieces include the Quadriga on top of the Brandenburg Gate, the equestrian statue of Blücher and the touching tomb of Count Alexander von der Mark, who died as an infant.