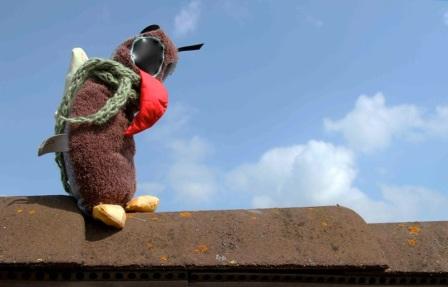 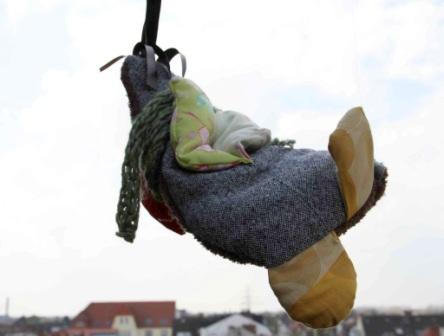 Fantastic Materials on the Road from Berlin to Bulgaria

Fantastic Materials on the Road from Berlin to Bulgaria

A figure made from old textiles by artist Vanessa Puschmann, “Django Weltenbummler” (Django Globetrotter) refuses to sit on a dusty shelf, but instead embarks on an adventure into the unknown. As part of the “Culture in Dialogue” competition held by the Schering Stiftung and MitOst e.V., Django, together with a dressmaker, a writer, and a photographer, will travel through Central and Eastern Europe in August 2012 to experience and explore the magic of the everyday and connect fantasies.

Sewing, writing, and taking pictures make up the performance that never changes on the road. People, things, and places tell their stories. Whoever wants to participate can hand in old rags or clothes, buttons or other materials and thus become a part of the whole. Every region will create its own figure, a traveling companion for Django who will help him accomplish his mission: singing the praises of simple, cast-away and forgotten things that may turn magical, of little things that may become big things by paying attention to them.

Already during the trip, pictures and stories of the participating people, textiles and places will be posted in blog form, ultimately resulting in an art book, a construction of texts and textiles made by bookbinder Susanne Labatzke and Greek media artist Effrosyni Kontogeorgou, designed to highlight the fantastic nature of the project. In addition, the experiences made during the trip will be presented at events in Berlin and Bremen, where the figures and the book will be on sale for a good cause.
The results of the trip will be presented on October 3-10, 2012, in Ruse (Bulgaria), where MitOst members from a variety of countries will meet for a dialogue on language and culture

Django’s Traveling Textile Workshop is one of the three winning projects of the 2012 “Culture in Dialogue” competition, held by the Schering Stiftung and MitOst e.V. for the fifth time. The competition supports cultural projects that promote the relations between neighboring countries and/or in the border regions of Eastern, Central, and Southeastern Europe. Dorothea Ahlemeyer’s and Vanessa Puschmann’s project convinced the jury because their artistic-creative process involves the residents of the places they visit during the trip.