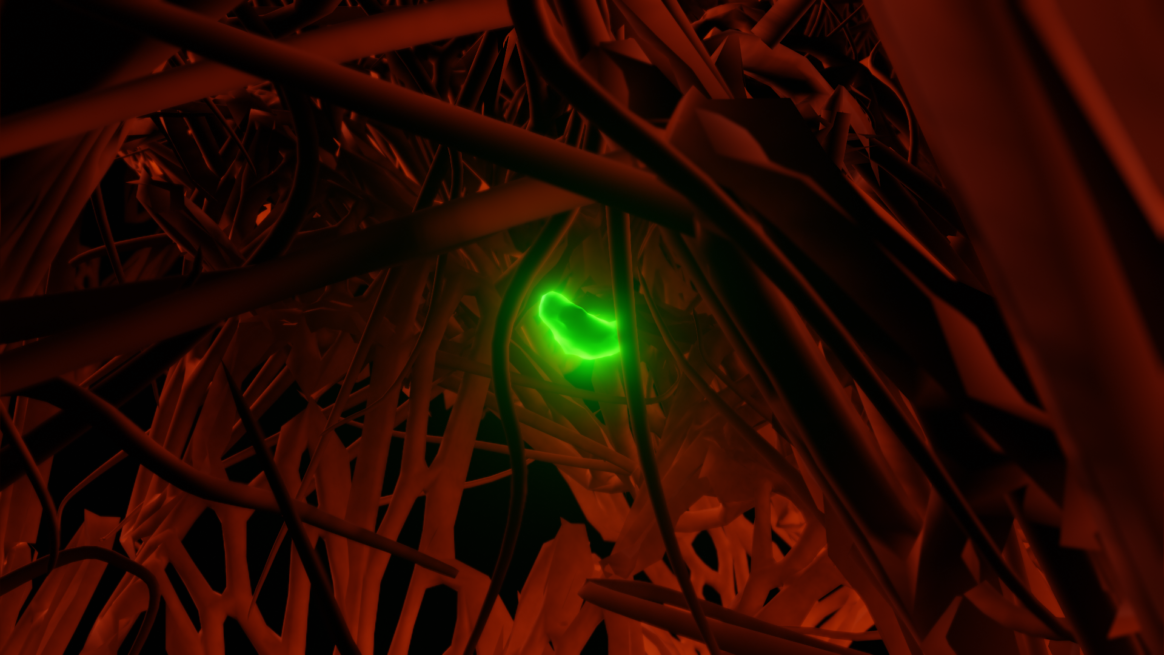 under your skin, nanocarriers directed through the web of life

under your skin, nanocarriers directed through the web of life

A fluorescent bacterium is the protagonist of Susanne M. Winterling’s installation “TEMPERATE.” Visitors meet the glowing bacterium in an exhibition room heated to body temperature. The bacterium, equipped with a nanobackpack filled with therapeutic agents, is making its way through tissue, just like in a video game.

Inspired by, among other things, pathbreaking research in biomedical technology, which for years has worked to develop drug-loaded nanocarriers, Winterling effects a radical change in perspective on nano-organisms. These entities that are invisible to the naked eye are the stars of “TEMPERATE”: Magnified many times over and larger than the exhibition visitors, the luminescent bacterium is moving across two monumental projection surfaces, complementing the scientific view, which, based on microscopic images, resonates in other works featured in the exhibition.

Similar to earlier works such as “Planetary Loop of Gravitation” (2018), where Winterling populated the exhibition space with pulsating, 3-D animated replicas of marine single-cell organisms, so-called dinoflagellates, “TEMPERATE” once again creates a visual system that reimagines the relationship between man and microorganism. The artist sees the production of such systems as a fundamental prerequisite for promoting a non-anthropocentric view of nature and the environment and creating awareness for the complex, fruitful, and productive relationship between the two life forms.

The exhibition was developed in cooperation with Simone Schürle, a biomedical engineer and professor for Responsive Biomedical Systems at ETH Zurich and her team, including Daphne Asgeirsson, Tinotenda Gwisai, Simone Hersberger, Nima Mirkhani, Anna Scheeder, Thuy Trinh Nguyen, and Thomas Valentin. Additionally, the artist would like to thank Bjørnar Sporsheim and the Department of Clinical and Molecular Medicine, Cellular & Molecular Imaging Core Facility at the Norwegian University of Science and Technology (NTNU).

The exhibition arose from the collaboration of...

Susanne Winterling studied Philosophy and Art history in Tuebingen und London. Since 2018, she has been Professor of fine art at NTNU Norwegian University of Science and Technology in Trondheim. She works across a range of media to explore the sentient economy, cultures and transformations of elements and materialisations. With an emphasis on enhancing our perceptual and critical consciousness, Winterling undertakes affective and material-based research that highlights interaction between materials, elements and species. Recent exhibitions and projects include In Desert Times, (w/The Kalpana), Kunstverein Freiburg, DE; The Sea Around Us, The Model, Slig0, IE; The Shape of the Tortoise (w/ The Kalpana), project 88, Mumbai, IN; Gravitational currents and the life magic, Empty Gallery, HongKong, CN; Barents spectacle, Kirkenes, NO; Between Bodies, Henry Art Gallery, Seattle, WA/US. Susanne Winterling lives in Berlin.

Simone Schürle is researching in the field of biomedical engineering and Assistant Professor for Responsive Biomedical Systems at ETH Zurich. She graduated in 2009 from the Karlsruhe Institute of Technology in Industrial Engineering and Management with specialization in micro/nanosystems. She then joined the Institute of Robotics and Intelligent Systems at the Swiss Federal Institute of Technology in Zurich (ETHZ) where she focused on magnetic manipulation techniques for biomedical applications. She was awarded with the ETH medal for her doctoral thesis and with fellowships from the SNSF, DAAD and the Society in Science for her postdoctoral studies at the Koch Institute for Integrative Cancer Research at the Massachusetts Institute of Technology, where she was researching as postdoctoral fellow from 2014-​2017. Besides activities in public outreach work and education, she is serving as Global Future Council for the World Economic Forum. She is also co-​founder of MagnebotiX, a young spin-​off from ETHZ.