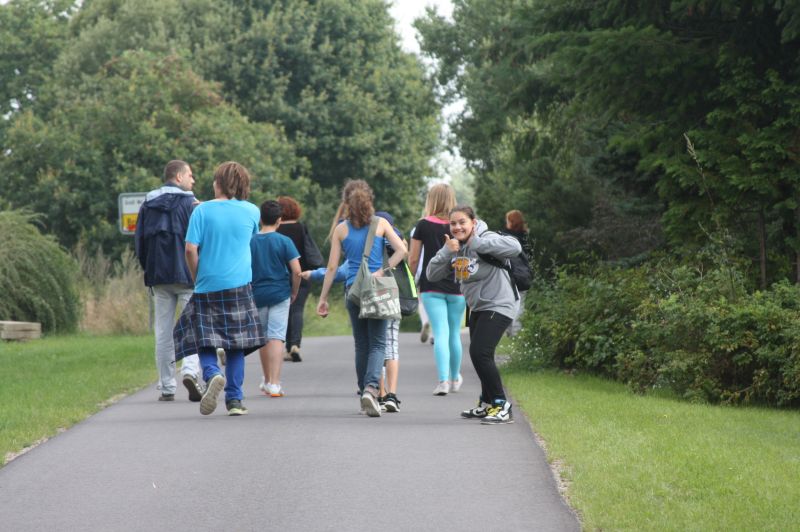 23.09.15, Berlin | In the play “AWAY! A Road Trip,” which will premiere on October 30, 2015, at the Alte Börse Marzahn, five young people embark on a fictitious trip away from home. “Don’t worry. We have enough money. Ciao. From now on, we will accept only the best. We’ve got thousand ‘likes’ already, guys. I love you!”

For five years, the Theater o.N. has worked with children and youth aged 14 to 21 in Marzahn-Hellersdorf. The third theater production resulting from this collaboration was created in a forest at the outskirts of Berlin, where young people under the guidance of a four-member team explored the topic of going away. The text of the piece, which was written specifically for each of the young actors, is based on the young people’s own improvisations and thoughts, which thus form the basis for the story. Luck has it that they find a bag. Assuming it contains money, they imagine going on a road trip, leaving their old lives behind and moving into the fast lane. But how long can the success trip that plays with truth and lies last?

The Schering Stiftung has supported the children’s and youth projects of the Theater o.N. in Marzahn-Hellersdorf from the very beginning to provide young people with opportunities to participate in the diverse cultural life of this economically depressed city district. The current piece, too, involved the young people from the start in the development of the piece, taking their questions and concerns seriously. The focus is on young people’s desire to go away. On mentally packing one’s bag. On taking a risk and simply packing up and leaving, jumping to the other side!

Away! is a production of Theater o.N., with support from the Schering Stiftung.