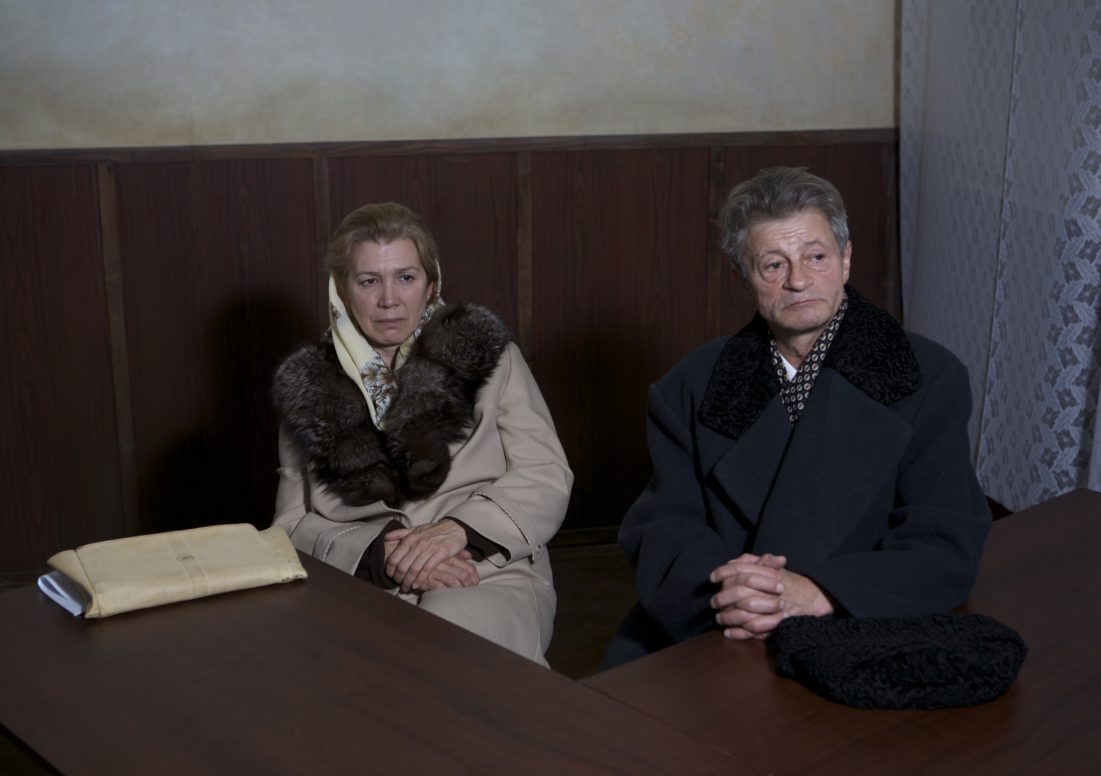 The Last Days of the Ceausescus

The Last Days of the Ceausescus

The images of the sentencing and execution of Elena and Nicolae Ceausescu on Christmas Day 1989 have seared themselves into the memory of several generations of TV viewers as one of the mythical events of world history. Twenty years later, with support from the Schering Stiftung, the International Institute of Political Murder (IIPM) brings to the stage a play about this major event in the sequence of events leading to the fall of Communism. Based on authentic video footage and eye-witness accounts, the arguably most famous show trial in European history will be staged, in Romanian, in an authentically reproduced set.

Conducting extensive research in Romania, the IIPM managed to establish contact with the people that were directly involved in the overthrow and trial of the Ceausescus: the general who betrayed them, the officer who arrested them, the soldier who killed them, but also dissidents, politicians of the transition government, revolutionaries, and people on the streets. From the inside – i.e. the personal perspectives of the people involved – “The Last Days of the Ceausescus” vividly captures the atmosphere at the time, a mix of euphoria, insecurity and betrayal. The dramatically condensed, subjective memory images culminate in the complete re-staging of the show trial of Elena and Nicolae Ceausescu. The audience is an eye-witness to this ur-event in the fall of Communism. World history becomes something to be experienced up close and personal, and documentary theater a painstakingly researched and highly political resurrection of images and memories.

“The Last Days of the Ceausescus“ is a story about the downfall of the most despotic ruling couple in post-war Europe as well as about regular people who made world history during the chaotic events of the overthrow. But it is also a story of a revolution, where a whole people rose up against its oppressors – only to be cheated out of real changes by its new rulers.

Based in Berlin and Zurich, the IIPM was founded in 2007 by Milo Rau together with Simone Eisenring, Jens Dietrich, Marcel Bächtiger, Nina Wolters and Franziska Dick with the goal to promote – and theoretically reflect on – the exchange among drama, visual arts, film and research in the field of reenactments, i.e. the re-staging of historical events. For many years, the founding members have been working together in a variety of constellations and formats. Their previous productions, which have been shown to great acclaim at numerous theaters in Germany, England and Switzerland, represent a new form of extensively researched and aesthetically crafted political theater.

The 20th anniversary of the execution of Elena and Nicolae Ceausescu is an interesting dramatic topic not only from the perspective of contemporary history, but primarily because of the fact that it was a media event, which itself already functions like an artificial series of images. The Schering Stiftung supports the project because of its unusual staging as a re-enactment by Milo Rau, Simone Eisenring and Jens Dietrich, which can be seen as the most logical form of coming to terms with an issue that so far has only been dealt with in media terms.

On the occasion of the première, a comprehensive documentation, Die letzten Tage der Ceausescus (The Last Days of the Ceausescus) will be published by Verbrecher Verlag in Berlin. In addition to the annotated transcripts of the court proceedings, the documentation includes historical, art theoretical and social scientific articles on the project as well as extensive research material on the play’s development and public reception.

The International Institute of Political Murder is giving a report of its tour through Rumania, Germany and Switzerland that lasted three months on

“The Last Days of the Ceausescus”
Lecture, Discussion, Video

January 28, 29 and 30, 2010, 8 p.m.
Theaterhaus Gessnerallee Zürich
The Last Days of the Ceausescus (performance as part of the “Gedankensprünge” festival)

January 30, 2010, 5 p.m.
Theaterhaus Gessnerallee Zürich
“The Revolution will (not) be televised: Dokumentation, mediale Vermittlung und Inszenierung von Geschichte (Documentation, media communication and the staging of history)” – a panel discussion with Andrei Ujica, Daniel Ursprung, Milo Rau, Gesa Ziemer, chaired by Valentin Groebner (organized by the History Department of the University of Zurich and the IIPM).

Please note that the dates and times listed above may be subject to change. For more information, please check the respective websites of the co-producers.