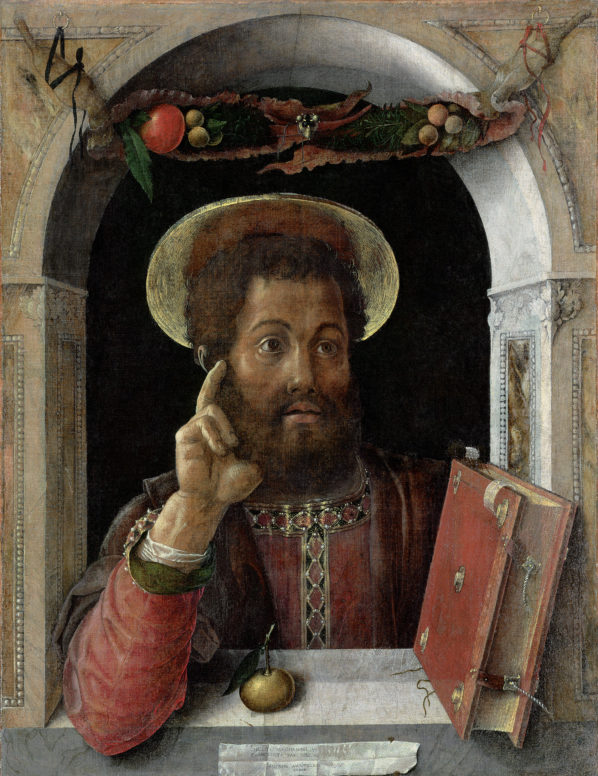 Focus on: Mark the Evangelist

Focus on: Mark the Evangelist

Most of the time, museums display works of art without any kind of contextual information. What viewers might miss apart from the purely visual impression is illustrated by the exhibition series “Focus on …,” which has been made possible by the Schering Stiftung since 2006. One by one, a total of nine works of art from the collections of the Städel Museum in Frankfurt are brought into focus and examined from a variety of scientific perspectives. From April 9, 2009, the focus is on Andrea Mantegna’s “Mark the Evangelist.”

Against a neutral, almost black background, a stone window frames the remarkably three-dimensional half-figure of St Mark the Evangelist, wearing a beard, a red coat and a purple cloak. His head propped up by his right arm resting on the window sill, his mouth slightly open, he looks past the viewer into the distance. In front of him, a lemon and a magnificent codex, the St. Mark’s Gospel, rest on the vividly marbled window sill, referring to the evangelist’s writing activities.

In spite of the signature inscribed in the cartellino at the bottom of the painting, there has long been doubt about the attribution of the half-length depiction of St. Mark the Evangelist in the collection of the Städel, dating from around 1450. However, when the picture was cleaned and restored in the 1990s, re-emphasizing the high quality of the painting on canvas, it was unanimously agreed that the painting dates to the artist’s early period and is thus, in fact, one of the earliest surviving works of Mantegna.

Part of the Städel Museum’s “Focus on …” series, the exhibition seeks to point out the various models and influences the young Mantegna drew on for his painting of St. Mark the Evangelist: Exhibiting detailed knowledge of central perspective, the artist also took his cues from contemporary art production in Padua as well as from motifs and formal principles deriving from classical antiquity. In addition, his extremely realistic depictions of details and surfaces show an influence of early Dutch art.

The exhibition also examines the painting’s current appearance. X-ray photography and infrared reflectography have shown that the painting was fundamentally re-conceptualized during the process of its execution. A lecture will open the exhibition on April 8, 2009, at 7 p.m.

The Schering Stiftung supports the exhibition series because of its integrated and interdisciplinary approach. “Focus on …“ uses scientific findings and methodologies in an innovative manner to educate about art, inspire both experts and the public to think in new, interdisciplinary ways, and intensify the dialogue among art, science and new technologies.