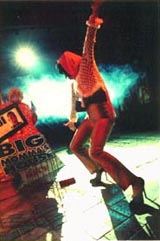 Riding the Trolley through Vilnius

Riding the Trolley through Vilnius

Although the Grips Theater performed Volker Ludwig’s subway revue “Linie 1” for the first time in 1986, this now legendary play has lost none of its freshness and topicality. The story of a runaway girl from the West German provinces who goes to West Berlin, where she is confronted with the harsh realities of the big city, poignantly mirrored the zeitgeist of the eighties. The musical has been performed and adapted in over forty languages.

In the spring of 2001, an adaptation by the Keistuoliu Teatras entitled “Rule No. 1: It is forbidden to dream of Vilnius” was performed for the first time in Lithuania. In September 2003, with the support of the Schering Stiftung, this “Odd Men Theater” gave a guest performance of its “Taisykle Nr. 1” in Berlin.

There is no subway in Vilnius. The young woman from the provinces, who ventures into the city on her search for her favorite rock star, rides the trolley bus or wanders around the old part of town on foot. She encounters a variety of bizarre characters, the schoolgirls Hysterika and Erika, “Bottle-Bag Sofia,” a pregnant gypsy and, of course, the widows who, in the Lithuanian version, mourn, with religious idealization, for Stalin. On the steps of the registry office, the girl finally finds “the man of her dreams.”

The Keistuoliu Teatras was founded in 1989 by a group of young actors graduated from the Lithuanian Music Academy. In just a few years’ time, it became the most popular children’s and youth theater in Lithuania. Thirty premières and various video films so far testify to its success. Two hundred performances a year and tours both at home and abroad meet with an enthusiastic response.

"The Lithuanian audience was enthusiastic about the subject-matter of the play: a recognizable city, familiar types, contemporary life and problems as well as youth jargon. The play became the most popular production in the program of the Keistuoliu Teatras."

"Even if one has never been to the Lithuanian capital one leaves this performance with the feeling that one has seen a lot of Vilnius: in passing through."