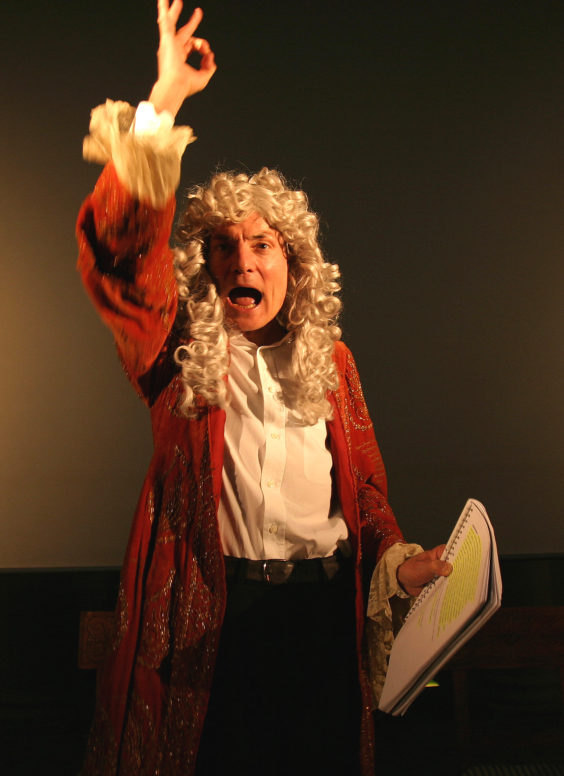 From the staged reading of "Calculus"

From the staged reading of "Calculus"

The play treats the historical controversy between Sir Isaac Newton and Gottfried Wilhelm Freiherr von Leibniz over the development of the infinitesimal calculus. Its author, Carl Djerassi, tells the story through entertaining dialogues between contemporary witnesses of the Leibniz-Newton conflict. By engaging with the historical controversy, he raises questions that are still valid today: What is inventorship? What does it mean to be an inventor? How do scientists behave towards each other?

It is the year 1710. Sir Isaac Newton accuses Gottfried Wilhelm Freiherr von Leibniz of plagiarism. A heated quarrel breaks out over who is the inventor of the infinitesimal calculus, resulting in one of the greatest scandals in the history of science. The scene of the quarrel is the London-based Royal Society, an assembly of the most renowned scientists of their day. But the members of the Royal Society in London become powerless spectators, skillfully manipulated by Newton.

The staged reading will be followed by a discussion with Carl Djerassi, Eberhard Heinrich Knobloch and Jürgen Mittelstraß.

Prof. Dr. Carl Djerassi
Professor of Chemistry at Stanford University. In addition to his scientific work, Carl Djerassi is the author of several plays that deal with the issue of ethics in science and research.

Prof. Dr. Eberhard Heinrich Knobloch
Professor at the Institute of Philosophy, Philosophy of Science, History of Science and Technology at the Technical University Berlin. Project director of the Leibniz Edition (Scientific, Technical and Medical Writings) of the Berlin-Brandenburg Academy of Sciences and Humanities.