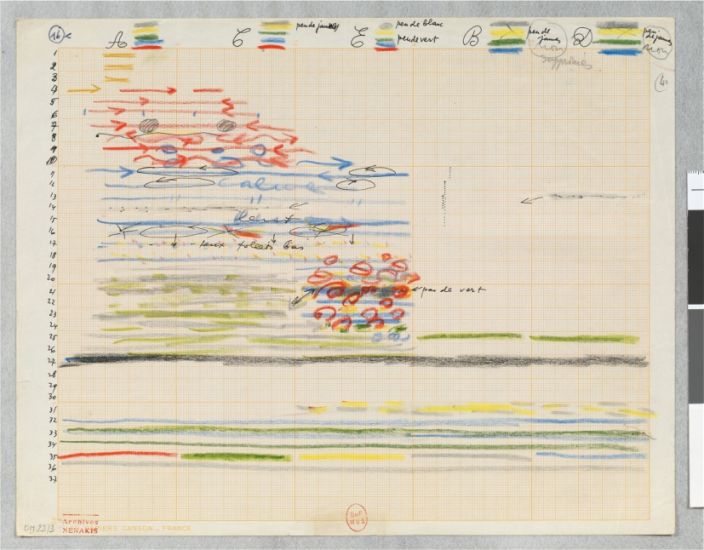 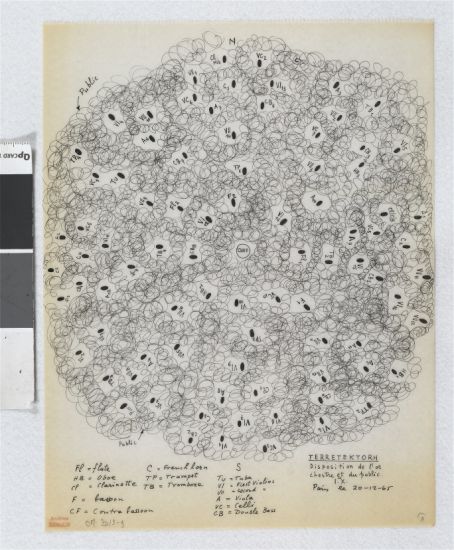 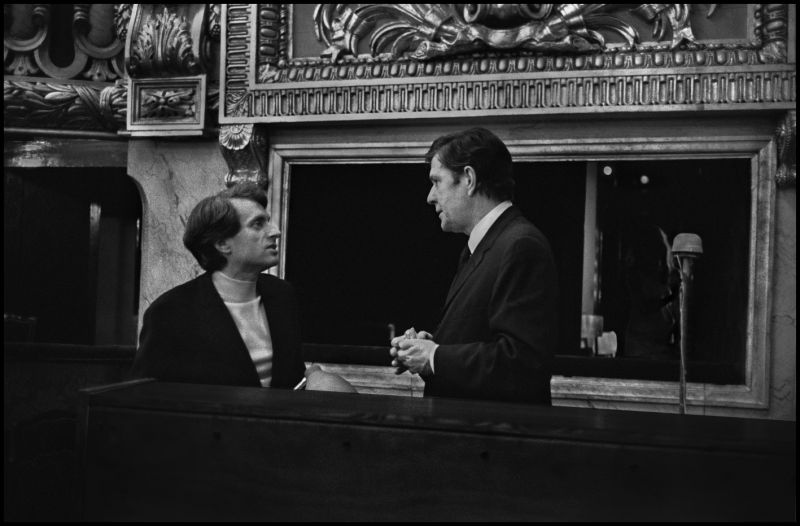 10.08.2011, Berlin | “Control and Chance” is the title of an exhibition of Iannis Xenakis’s graphic works and sound installations, which will open at the Berlin Academy of Arts on September 6, 2011. Part of a major interdisciplinary focus on John Cage and his artistic partners and contemporaries such as, for example, Merce Cunningham, the exhibition examines the controversy between the seeming anarchy of Cage’s “Change Music” and Xenakis’s strictly mathematical constructions. The focus is, among other things, on the relationship between control and chance and thus on chance as a method during the period of this idea’s emergence.

Iannis Xenakis (1922-2001) is undeniably one of the major composers of the 20th century. The Greek-French artist is less known as an architect, in spite of the visionary nature of both his works that resulted from his long-standing collaboration with Le Corbusier and his polytopes – spectacular multimedia performances. What connects his various works is the inclusion of mathematical processes – and his working method of first putting all ideas on paper: Xenakis “thought” with his hand.

Xenakis’s drawings, a part of his work that has so far received little attention, are the focus of an exhibition organized by the Academy of Arts as part of a John Cage program. The exhibition includes sketches, studies, scores, drafts and unknown film documents on ground-breaking musical works such as “Metastaseis” and “Terretektorh,” on architectural works such as the diatope for the Centre Pompidou in 1974 as well as the avant-garde polytopes. In his works on paper, Xenakis gave graphic form to his complex calculations at the intersection of art, architecture and mathematics. They are visual preliminary stages of an art that finds its expression mostly in the listening experience; in the exhibition, the drawings and the musical excerpts that visitors can listen to at audio stations illuminate each other.

First shown at the DrawingCenter in New York in 2010, the exhibition at the Berlin Academy of Arts has been expanded to also include works by Xenakis’s contemporaries as well as current works. By drawing connections to Hermann Scherchen, Richard Buckminster Fuller or Allan Kaprow, the topic of “control and chance” opens up new perspectives on John Cage. During the 1960s, the controversies around processes of chance and control – which were exemplified by the debate between Cage’s principle of indeterminacy, serial music, and Xenakis’s strictly mathematical constructions – extended beyond the field of music. The different positions are summed up in an archive room, which includes video portraits featuring Eberhard Blum, Reinhild Hofmann, Enno Poppe, Dieter Schnebel and previously undisplayed documents from the Academy archives such as the drawings for the planned Scherchens auditorium in Gravesano (1961).

The methodological approach of the “Control and Chance” exhibition, which dates back to a correspondence between John Cage and Pierre Boulez, is central to the work of the Schering Stiftung, which seeks to promote the dialogue between art and science and the interdisciplinary dialogue between the visual and performing arts as well as music and architecture. The exhibition examines the seeming contrast between controlled science on the one hand and the random creative processes in art on the other hand, refuting this contrast by juxtaposing John Cage and Iannis Xenakis. The method of chance in artistic production is examined not only through documentary materials, but also by including contemporary artists and architects.

Accompanying Lecture and Performance Programme on November 25 and 27, 2011 (in German):

(The ticket is also valid for the exhibitions “Merce Cunningham performs STILLNESS” and “Members comment on Cage.”)

For additional information on “A Year from Monday. 365 Days of John Cage,” please visit www.adk.de/cage

The part of the exhibition which was organized by the Drawing Center, New York, was realized with the special assistance of the Bibliothèque nationale de France, Paris.