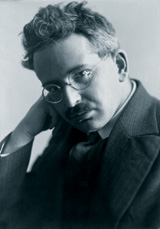 His dissertation was ignored. His habilitation was rejected by the University of Frankfurt. It was only after his death, in the mid-1950s, that the expert public began to recognize the productive impetus of Walter Benjamin’s work.

Through his reflections on the changes in art, culture and the media, Walter Benjamin opened up new horizons not just for philosophers and cultural historians. Artists such as Joseph Beuys and Marcel Duchamp also dealt with his ideas in their work.

The exhibition “WritingImagesIdeas” in the Haus am Waldsee for the first time shows a representative selection of works by artists who have grappled with Benjamin’s personality, his writings and ideas since the 1970s. The focus is on terms such as myth-making, aura and reproduction. It was through these terms that Benjamin shaped the debate about the transformation of art and society due to the new technical media of photography, film and radio.

In keeping with its goal to support innovative and outstanding projects, the Schering Stiftung joins the German Capital Culture Fund (Hauptstadtkulturfonds) in sponsoring this exhibition, which for the first time presents to the public a comprehensive and scholarly review of Benjamin’s influence on the arts.