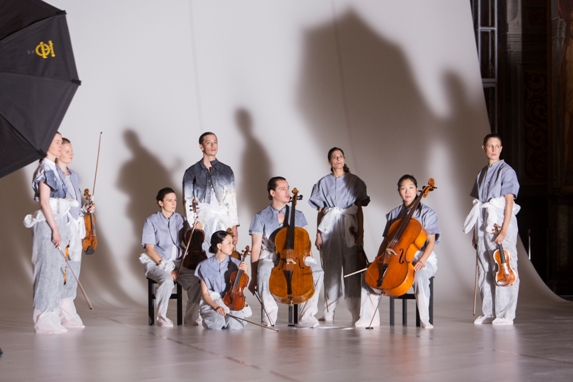 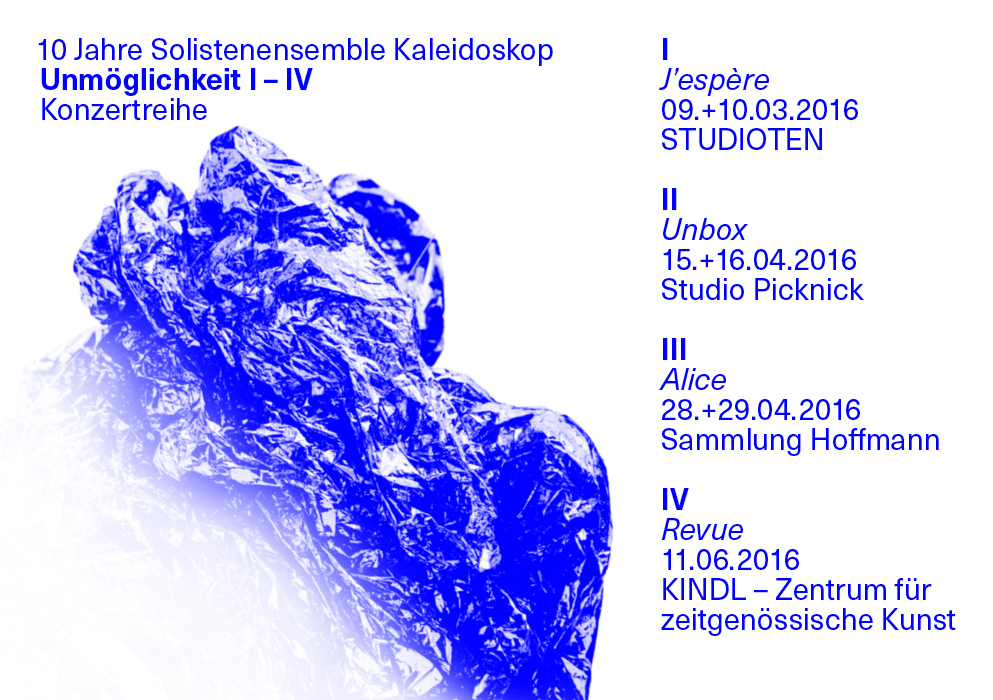 On the occasion of its ten-year anniversary in 2016, the Soloists’ Ensemble Kaleidoskop ventures to look both back and ahead: the four-part concert series “Unmöglichkeit (Impossibility) I–IV” is about endpoints and possible new beginnings. At different arts locations, the four concerts – “J’espère” (March 9 & 10, 2016), “Unbox” (April 15 & 16, 2016), “Alice” (April 28 & 29, 2016), and “Revue” (June 11, 2016) – open up association spaces to both the ensemble and its audience that hold out the hope of a new “clairaudience.” Searching for a musical standpoint and the ability to communicate this standpoint as well as the possibilities to make music together, “Unmöglichkeit I–IV” inquires into the existence of an absolute, indestructible idea of a work (of art).

Together with the artist Dirk Bell, Kaleidoskop, in “J’espère,” ventures forth to search for the moment when noise becomes music. The result of this experiment will be seen and heard in “Unbox” in a different context at the Galerie Studio Picknick. “Alice” takes us into the magical world of the Sammlung Hoffmann by juxtaposing music and the fine arts, as forms of abstraction. The last concert, “Revue”, brings us full circle: In an expansive concert at KINDL – Center for Contemporary Art, the ensemble itself becomes the object of observation.

During its ten-year existence, Kaleidoskop has earned an excellent reputation for its interdisciplinary performances and established itself as one of the most innovative music groups. The anniversary will not be a mere summing up, but a look ahead to the future and a field for experimentation broadening our understanding of music through a dialogue with other disciplines. This is why the Schering Stiftung once again supports the ensemble. In its four-part series “Unmöglichkeit I–IV”, Kaleidoskop examines the links between the fine arts and music and thus challenges its own focus on materiality.

A project by the Soloists’ Ensemble Kaleidoskop. In cooperation with STUDIOTEN, Studio Picknick, Sammlung Hoffmann, KINDL – Center for Contemporary Art, and RADIALSYSTEM V.

Funded by the DKLB-Stiftung, the Schering Stiftung, and the Ernst von Siemens Musikstiftung.