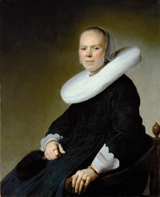 07.11.2006, Städel Museum, Frankfurt am Main | For the first time in decades, the „Portrait of a Lady in an Armchair“ (ca. 1642–45) by the Dutch painter Johannes Verspronck will be presented to the public. The Dutch baroque work, part of the storage collection of the Städel Museum in Frankfurt/Main since the end of the Second World War and recently extensively restored, will be displayed next to the double portrait of a married couple by famous fellow artist Frans Hals, in an exhibition featuring comprehensive explanatory material.

Both Johannes Verspronck and Frans Hals gained fame and respect as portraitists in the Dutch town of Haarlem in the first half of the 17th century. While Frans Hals‘ customers belonged mainly to the circle of Protestant refugees from Flanders who had gained power and fortunes in the town, Johannes Verspronck’s patrons were drawn mostly from the Catholic milieu. Not least because of their different clientele, the artists developed different ways of painting.

As part of the extraordinary exhibition series „Focus on: …,“ Verspronck’s „Portrait of a Lady in an Armchair“ (ca. 1642–45) will be examined not only from an art historical perspective, but also in its historical and sociological context. In addition, the exhibition will show the results of the scientific analysis of the painting. Thus, a photographic documentation enables visitors to see the individual stages of the complicated restoration, but also, by comparison, details in painting techniques. „Mind maps,“ comparison images, microscope photographs and other material make visible the portrait’s complexity and illustrate its historical and social background.

While the painting may seem stiff and conventional to today’s viewer, a closer examination and interpretation of the artist’s use of form reveals the high social status of the „Lady in an Armchair“ and even an open-minded attitude towards new developments. It will be interesting to see what else can be discovered in the painting!

Johannes Verspronck is the subject of the second exhibition in the „Focus on: …“ series, which is supported by the Schering Stiftung. In a total of nine exhibitions, masterpieces from the distinguished collection of the Städel Museum are presented from a variety of scientific and scholarly perspectives. The series will be continued on April 10, 2007, with „Focus on: Ernst Ludwig Kirchner: Life, 1927-1932 (Inv. No. 2111).“