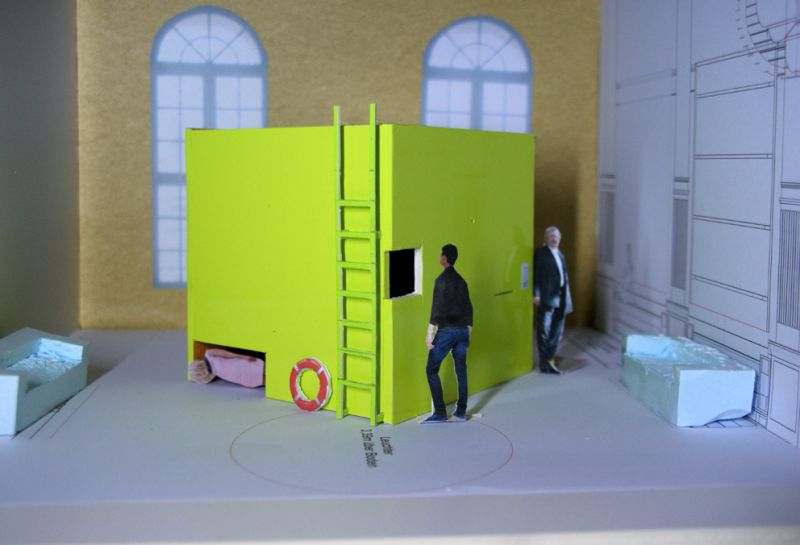 What Do We Need? – More Room for Children’s Creativity

What Do We Need? – More Room for Children’s Creativity

05.10.2011, Berlin | The Deutsche Theater (DT) opens a new, quite distinctive venue: the Children’s Room. On October 4–15, 2011, eighty children and teenagers will participate in a fall camp at the Deutsche Theater and over a period of 10 days talk about the question of “What Do We Need?” In a total of six groups, the young people will try to come up with answers to this question by staging plays and creating spaces, images and music. The results will be presented to the public on October 16, 2011, at 4 p.m., at the Kammerspiele and in different locations in and around the DT (hall, box, Reinhardt Room, square in front of the DT). This event will kick off a long-term “occupation of the children’s room” – the design of a container, as a space by young people for young people, which will at times be used for art projects, first in the hall, and starting in March 2012, on the square in front of the Deutsche Theater.

The project is based on the idea that a theater has to engage with its audience – in this case its young audience – and to know, acknowledge and take into account its desires and demands. The questions “What do young people need from the theater and what does the Deutsche Theater need from young people” go hand in hand with questions about the future, about utopias and about how people can live together. The Children’s Room, a venue of the Young DT, provides children and young people in Berlin with a space for their ideas and addresses their need to become creative artists themselves. By definition, the focus will always be on the relationship between interior and exterior worlds. Since Berlin offers still too few possibilities and spaces that can be designed by young people themselves under the guidance of artists, the Schering Stiftung supports this DT project during the entire 2011/2012 season.

“What Do We Need?” is a question that cannot be answered by panels and committees. The world is too complex for that. One can, however, ask a group of experts whose members potentially want and search the absolute everywhere and in everything. Looking for these experts among its young audience, the Deutsche Theater takes young people seriously.

Young people between 12 and 14 years design the Children’s Room, furnishing it with things, photographs, bodies, wallpapers and a soundtrack. The audience is granted selected insight, which can generate unexpected perspectives and approaches.

Students at the TuSCH partner school of the Deutsche Theater develop scenes and performances on the topic of “Daylight & Night Vision.” The works will be shown on the square in front of the DT and as part of the TUSCH Festival Week (March 2012).

During the Autorentheatertage, the Youth Club moves into the Children’s Room. In cooperation with the “Treffen Junger Autoren” of the Berliner Festspiele, they will develop and play scenes on the topic of the Children’s Room from the perspective of those who are in the process of moving out.