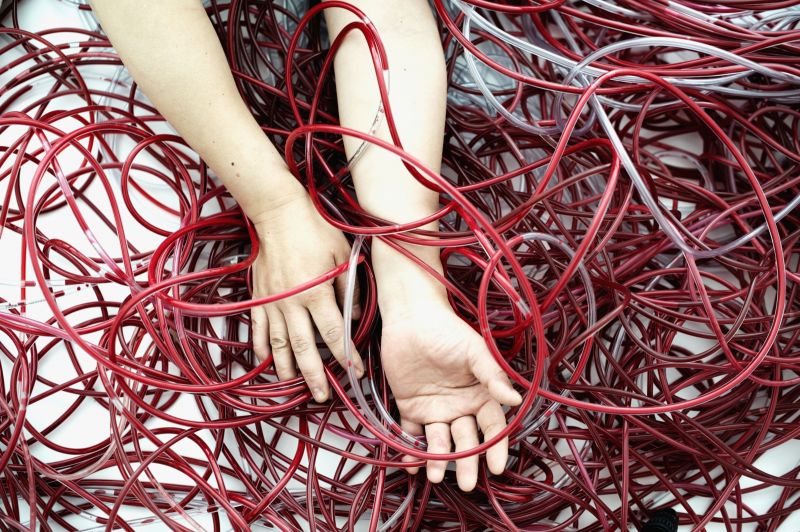 Advance tickets and further information on the project:
http://alif.zafraanensemble.com/

What alters our perception? “alif::split in the wall” is an experimental concert by the Zafraan Ensemble featuring Jeremias Schwarzer, which transposes the principles of visual arts exhibitions and performance art onto the musical form of the concert, thus appealing to multiple levels of perception on the part of the audience. The central piece is a spatial installation by the Japanese artist Chiharu Shiota. In cooperation with composers Stefan Goldmann and Samir Odeh-Tamimi, the Berlin-based artist generates a pulsating organism within which both musicians and the audience can move freely. The project will premiere at Radialsystem V as part of MaerzMusik – Festival für Zeitfragen.

Based on an idea by artistic director Jeremias Schwarzer, the composers Stefan Goldmann and Samir Odeh-Tamimi create a five-hour space for acoustic experiences defined by the tension between different states of perception, between continuum and éclat, between techno, Arab musical practice and Western avantgarde, between inward- and outward-directed attention. The Zafraan Ensemble and the singer-performer Salome Kammer stage the multi-hour performance between these poles of perception. Stefan Goldmann controls the electronics, while concert designer Folkert Uhde is directing the visuals and the live camera.

The starting point for the project is a Sufi teaching story about a student who, year after year, repeats writing the alif, the first letter of the alphabet. One day, he returns to school and draws the letter with a single stroke, whereupon the blackboard and the wall behind it split into two. This story describes the  dramatic intrusion of an entirely new reality into familiar processes and repetitions.

By combining music, space, and installation, the project “alif::split in the wall” speaks to different levels of perception on the part of the audience. The familiar concert situation is dissolved and the length of the concert and the unusual spatial situation facilitate entirely new experiences, which is why the Schering Stiftung supports the project. Following the premiere and an additional performance in Berlin, the experimental concert will be performed at ION – Musica Sacra in Nuremberg on June 10, 2016, and elsewhere.

alif::split in the wall
a musical exhibition space

A production of Zafraan Ensemble in co-production with Radialsystem V, Berliner Festspiele / MaerzMusik – Festival für Zeitfragen, and ION – Musica Sacra. With support from the German Federal Cultural Foundation, the Schering Stiftung, and the Kofinanzierungsfonds Berlin. Commission funded by the Ernst von Siemens Musikstiftung.