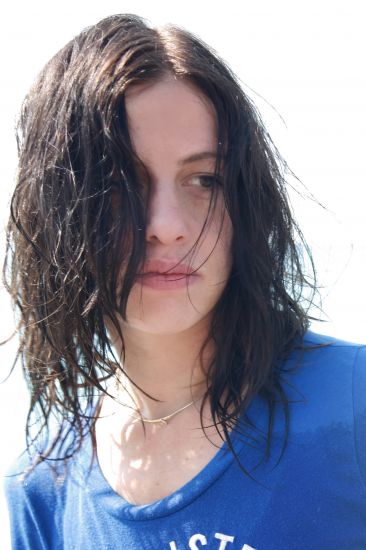 Anne Imhof designed the German Pavilion for the 57th International Art Exhibition of the Venice Biennial, “Viva Arte Viva.” She has developed a performance specifically for the space of the German Pavilion, which inquires into how the new technological and economic conditions affect and act on human beings. In her performances, Imhof reflects on how the optimized and capitalized body is (co-)constituted through the media. Imhof thus addresses a key question at the interface of biology, technology, and art, which is also at the heart of many projects of the Schering Stiftung. The German Pavilion is curated by Susanne Pfeffer.

Gazes cross, but no communication ensues. They perceive others, but there is no recognition, no acknowledgment. Post-gender, individualized, peculiar and yet stereotypical: such are the human figures in Anne Imhof’s paintings and scenarios. Noises, sounds, and compositions lend a rhythm to the spaces and bodies, synchronizing them in a dilated time loosely structured by narratives. The action is contingent; everything might be different at any moment. The movements fluctuate between the viscous mundanity of everyday life and mysterious rituals, between schematic, remote-controlled procedures and individual malfunctions, between uniformity and punk. Aligned with the group, an aimless individuality persists. They may sing together, but their song is of the I.

On mats and sleeping bags, amid punching bags, baseball bats, and razors, the performers populate the training camp of capitalized bodies and optimized life. Strained to the point of bursting or gone limp, their regimented and fragile bodies appear as a material molded by pervasive yet invisible structures of power. Media representation is innate to these biotechno bodies: they seem forever on the verge of transformation into pictures ready for consumption; they aspire to become images, digital commodities.

Anne Imhof confronts the brutality of our time with a hard realism. Her scenarios visualize the constitution of the body in the demarcation of material and discursive, of technological, socioeconomic, and pharmaceutical boundaries. Imhof thus reveals the space between body and reality, the space where our personality comes into being.

Anne Imhof (b. 1978) graduated from the Städelschule in Frankfurt am Main in 2012. Imhof was awarded the Preis der Nationalgalerie in 2015 and went on to produce the opera Angst, which was presented in three acts at Kunsthalle Basel, the Museum Hamburger Bahnhof in Berlin, and the Biennale de Montréal in 2016. Her performance cycles Deal (2015), Rage (2014), Aqua Leo (2013), and School of the Seven Bells (2012) were shown in solo exhibitions at MoMA PS1, New York (2015), the Carré d’Art—Musée d’art contemporain de Nîmes (2014), New Jerseyy, Basel, Portikus, Frankfurt am Main (2013), and elsewhere. Her art has also been featured in international group exhibitions, including at the Palais de Tokyo, Paris, the Centre Pompidou, Paris (2015), and the Museum für Moderne Kunst, Frankfurt am Main (2014). Anne Imhof was a visiting professor at the Academy of Fine Arts Munich in 2015. In 2013, she lived and worked in Paris on a fellowship from the Hessische Kulturstiftung.