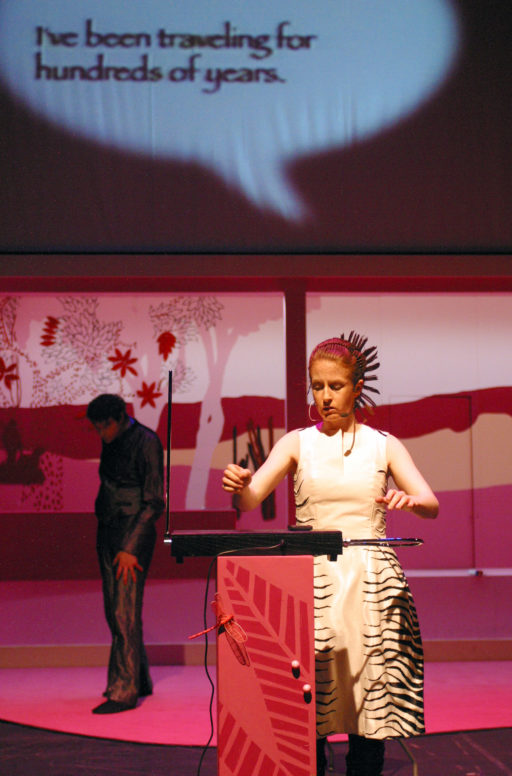 By bringing a science fiction plot to an opera house stage, the Berlin opera company NOVOFLOT took a courageous step. Based on an idea by Sebastian Bark and Sven Holm, “Kommander Kobayashi” pursues a new course both in terms of its contents and sequence of events. Thematically, the plot of the opera saga resembles that of a typical science fiction series: Kommander Kobayashi, the hero, leads the spaceship La Fenice and a handful of astronauts on a mysterious pursuit (or escape?) through space and time.

The saga is unfinished. It unfolds as a series of several short chamber operas written by different composers. Three operas together constitute a season and the program of an evening. The “operatic production thus becomes an odyssey through a hybrid and expanding universe of contemporary opera,” says the company NOVOFLOT of its production whose texts were written by Tobias Dusche. By supporting the “Kommander Kobayashi” project, the Schering Stiftung honors the opera company’s attempt to break the boundaries of standard musical theater productions and leave behind the “classic” form of opera.

The series, which was awarded the Ernst von Siemens Music Prize, opens with the pilot episode “4 Hermenauts.” The première of the first season will take place on January 14, 2005, in the Hamburg State Opera on the occasion of the opening of the Opera Stabile. “4 Hermenauts” consists of 4 scenes, with music written by the composers Moritz Eggert (Germany), Aleksandra Gryka (Poland), Ricardas Kabelis (Lithuania) and Juha T. Koskinen (Finland) respectively.

Further episodes of the operatic saga supported by the Schering Stiftung and the Federal Cultural Foundation (Bundeskulturstiftung) are “Kobayashi Sings (Under Foreign Stars),” composed by Helmut Oehring (Germany), and “Set Phasers on KILL!,” composed by Jennifer Walshe (Irleand), who will also assume a role on stage herself.