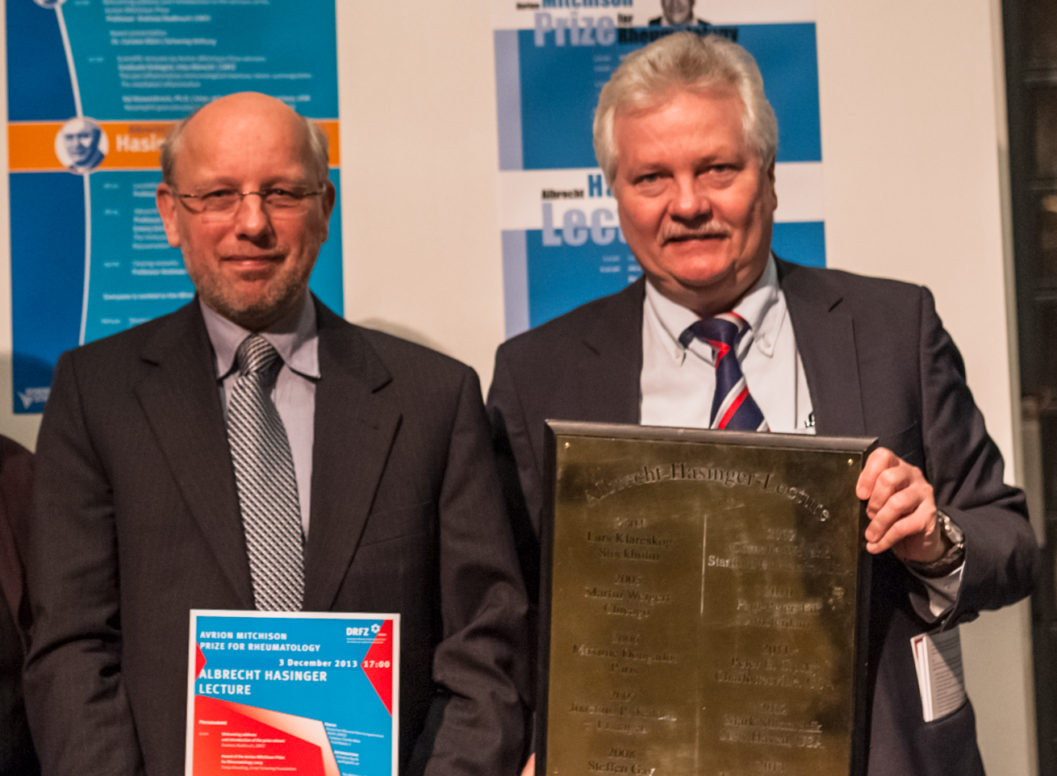 Tom W. J. Huizinga received his MD from the University of Amsterdam in 1986. He subsequently joined the army where he worked as a blood transfusion specialist from 1986 until 1987. In 1989, he earned his PhD (cum laude) with a thesis on the biochemical and functional characterization of Fc-gamma receptors. After a postdoc at the Dartmouth Medical School in New Hampshire, USA, in 1990, he qualified as an immunologist and started his training in internal medicine in 1991. He finished his rheumatology training in 1997. From 1994 to 1999 he held a fellowship from the Royal Netherlands Academy of Arts and Sciences to study the “Regulation of TNFa production in rheumatoid arthritis.” In 1998 he was appointed associate professor and, in 2000, full professor of rheumatology.

Since 2006 he has been head of the Department of Rheumatology at the Leiden University Medical Center.
Professor Huizinga received a number of prizes for his work, including the Boerhaave Prize for outstanding contributions to immunology and the Howard and Martha Holley Research Prize.
He has served on a number of committees, including the Annual Meeting Planning Committee of the American College of Rheumatology (2000-2003) and the Annual Meeting Planning Committee of EULAR (2004-2007).
He serves on the board of the Dutch Society of Rheumatology as well as on a number of editorial boards such as Genes and Immunity, International Journal of Advances in Rheumatology, Joint Bone Spine, Revue du Rhumatisme (International Edition), Annals of Rheumatic Diseases, Plos Medicine, and Current Rheumatology Reviews.
Huizinga’s current research is focussed on translational research in rheumatoid arthritis and clinical research in neuro-psychiatric SLE.
Professor Huizinga on his lecture about: „Immunological Features of the development of RA over time”:

“Rheumatoid arthritis (RA) is a chronic, destructive autoimmune disease affecting primarily the joints. With more sophisticated and effective therapies becoming available, early intervention is crucial for preventing irreversible joint damage. Antibodies to citrullinated antigens (ACPA) provide an effective tool to diagnose erosive arthritis in a very early stage of the disease.
All strategies in RA clearly show that a window of opportunity exists during which the disease contracts characteristics that make the disease process chronic.
Analyses of the immune response has learned that the immune response against citrullinated antigens with respect to antigen specificity, isotype usage and affinity maturation occurs. Using a a new autoantibody system, autoantibodies against carbamylated antigens shows that development of the autoimmune response in RA is probably not antigen specific. The focus of the current research is glycosylation differences between alloa autoantibodies and the detection of specific changes in antibodies against citrullinated antigen.”

Dirk Baumjohann from the University of California is awarded the Avrion Mitchison Prize 2013 for his work “Persistent antigen and germinal center B cells sustain T follicular helper cell responses and phenotype”.