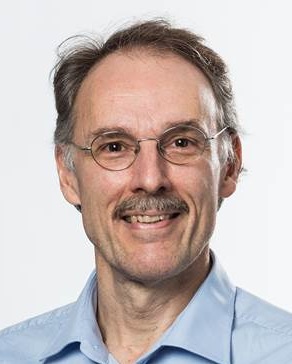 Michael L. Dustin (born 1962) is head of immunology at the Kennedy Institute of Rheumatology in Oxford. On the occassion of the Albrecht Hasinger Lecture Professor Dustin will talk about „Mechanisms of information transfer at immunological synapses“:

“The adaptive immune response depends upon interaction of T cell antigen receptor (TCR) and peptide-MHC complexes in the nanometer scale (15 nm) gap between the T cell and antigen presenting cells.  If these interactions are appropriately regulated, the host is protected against a broad spectrum of pathogen and cultivates productive close interactions with many commensal microbes.  Errors in these interactions or their interpretation can lead to pathogen escape at one extreme or autoimmunity and inflammatory diseases at the other extreme.  This immunological synapse, the intercellular communication platform of the immune system, is a key to health and has been the focus of my work over the past 30 years.

The immunological synapse is built on a foundation of cell adhesion molecules (CAMs) that I studied as a graduate student in the lab of Timothy Springer at Harvard Medical School.  The Springer lab had generated monoclonal antibodies that inhibit killing function of cytotoxic T lymphocytes (CTL) and defined short CAM pairs (15 nm) and long CAM pairs (~30 nm) with thousands of these interactions bridging the synapse.  I did work defining components of the long CAMs referred to as intercellular adhesion molecules (ICAMs).  I also discovered that the activity of the long CAM on T cells was determined by the TCR- providing the missing link between antigen specificity and the bridge building activity of the adhesion molecules.

The existence of long and short CAMs raised the possibility that the immunological synapse would have multiple “levels” of 15 nm and 30 nm spacing between membranes.  We demonstrated segregation of the long short and long CAMs in a model synapse, which was complementary to results from Kupfer demonstrating a bull’s eye immune synapse with TCR in the center surrounded by a ring of long CAMs.  Higher resolution imaging later revealed that these supramolecular activation clusters (SMACs) were mosaics of smaller elements- such that thousands of receptors were organized into tens of microclusters that coalesced into radially symmetric SMACs.  TCR signaling is concentrated in microclusters that form in the periphery of the immunological synapse.

Recently, we have discovered that these TCR microclusters are transported to the center of the synapse where these membrane domains bud to form extracellular vesicles that are directly handed off to the antigen-presenting cell.  We refer to these as synaptic ectosomes.  We are currently investigating the potential of synaptic ectosomes as a novel mechanism for information transfer in the immunological synapse, particularly in the context of T cell help for high affinity antibody production.

Dr. Spee-Mayer and Dr. Neumann from the German Rheumatism Research Center in Berlin are awarded the Avrion Mitchison Prize 2015 for the best research work in rheumatology.