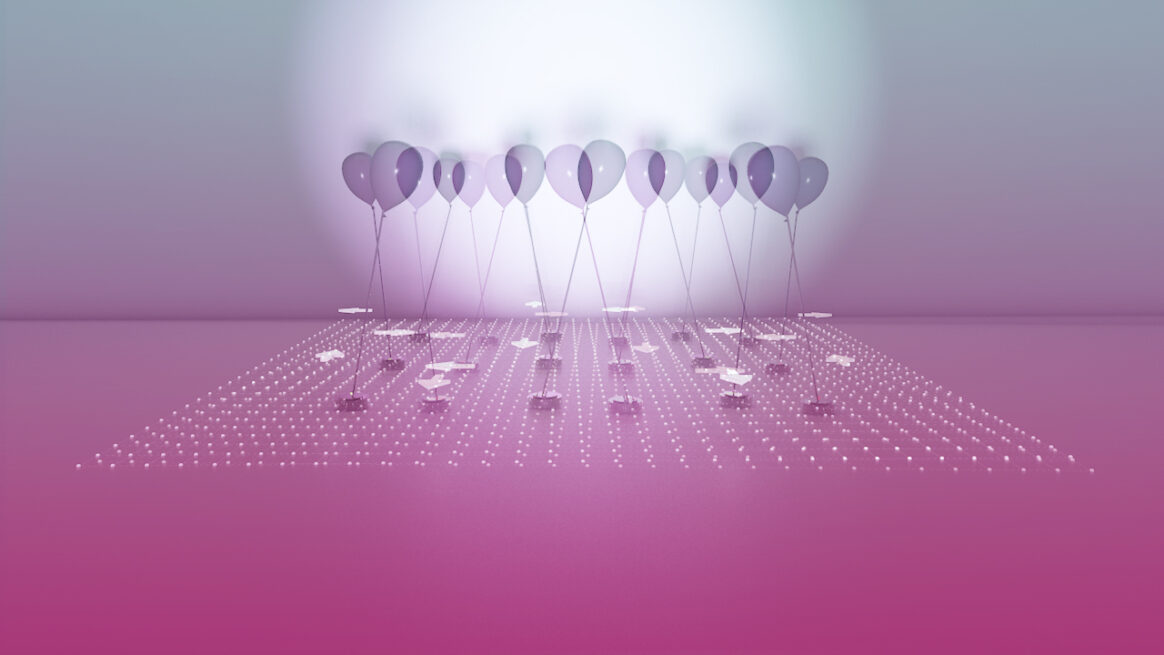 The exhibition “PushMi PullYu” by art and design studio Hyphen-Labs transforms the Project Space of the Schering Stiftung into an experimental laboratory and a stage for swarm intelligent robots. Moving robots scurry through a room bathed in colored light. Visitors experience the enigmatic movement of automated devices and their projections on the walls. While the interaction of the robots might seem arbitrary at first, the public will observe how under certain lighting conditions a seemingly random action turns into a choreography. Moreover, the visitors can decide to influence the scenario by adding a light input that triggers the swarm intelligent behavior.

Through its installation “PushMi PullYu”, Hyphen-Labs encourages the public to explore concepts of consciousness and decision-making based on much debated questions such as: Is free will an illusion and what would it mean if we were to live in a deterministic universe? Created through collaborative exploration and research, “PushMi PullYu” comments on this entanglement as mediated through automated devices navigating their way between deterministic and free will universes. The installation is inspired by the collective consciousness of swarm behavior in nature and the research on free will done by collaborating neuroscientist Prof. Dr. John-Dylan Haynes. Haynes’ experiments reveal that brain signalling involved in decision-making occurs seven to ten seconds prior to what is thought of as a conscious decision. Hyphen-Labs has designed the swarm intelligent behavior of the robots to reflect exactly this time, during which the brain already knows how a person decides before he or she consciously does so.

Hyphen-Labs invites the audience on a journey to the margins of consciousness and unconsciousness, where imagination meets observation, on a journey that questions the theories that have always concerned scientists and artists, philosophers and psychologists. The installation “PushMi PullYu” will be an arena for the replication of dualistic theories, research on brain activity, and debates on free will.

Hyphen-Labs is an international studio working at the intersection of technology, art, science, and the future. Founded in 2014 by the Mexican-American engineer Carmen Aguilar y Wedge and the Turkish architect Ece Tankal, Hyphen-Labs collaborates with women psychologists, programmers, artists, scientists, and other professionals from all over the world. The studio uses its diverse expertise and cultural perspectives to develop works that address current social discourses, outline technological innovations, and are informed by scientific research.