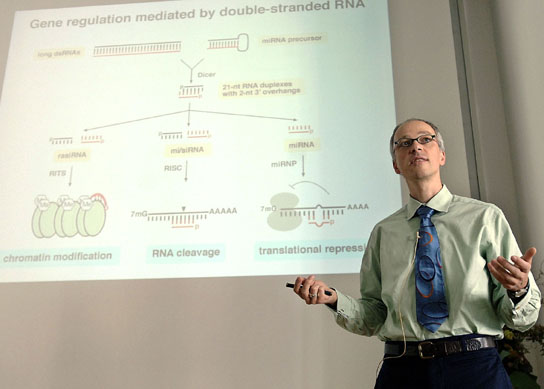 Due to the discovery of RNA interference a few years ago, it is now possible to “switch off” particular genes. This has opened up totally new research fields as well as therapeutic approaches. Reason enough for the Schering Stiftung and the German Society for Biochemistry and Molecular Biology (GBM) to organize a symposium entitled “RNA Interference.” The symposium met with great interest: An audience of more than 200 gathered at the Harnack House of the Max Planck Society in Berlin to listen to the high-profile speakers, which included Professor Dr. Thomas Tuschl from the Rockefeller University in New York. As the newly honored recipient of the Ernst Schering Prize 2005 which comes with a prize of 50,000 Euro, Tuschl appeared as the speaker of honor at the symposium.

It has been four years since Thomas Tuschl and his team at the Max Planck Institute for Biophysical Chemistry in Göttingen were able, for the first time, to demonstrate the effectiveness of RNA interference (RNAi) in human cells. He succeeded to introduce short, double-stranded RNA (dsRNA) into a cell and thus switch off particular genes. After the dsRNA separates into single strands, these become bound to a multi-protein complex known as RISC (RNA Interfering Silencing Complex), which then binds to?and cleaves?the complementary messenger RNA (mRNAs). As a consequence, the mRNA gene remains silent. The switching off of mRNA through another RNA led to the name RNA interference, and the short RNA segments are thus also called short interfering RNAs (siRNAs). Normally, they are 21 to 23 nucleotides long.

Having been honored with the Ernst Schering Prize 2005 only the day before, Thomas Tuschl at the Berlin symposium presented the latest data on the biochemical characterization of the Argonaute protein Ago2, which plays an important role in the RISC complex. The Ernst Schering Prize recipient had a surprise in store: With bacteria of the genus Aquifex aeolius, the RISC prefers to bind DNAs instead of RNAs to then induce mRNA cleavage. Tuschl thus speculated on the possible existence of siDNAs, which would be an indication of “new regulatory mechanisms.”

Since the discovery of RNAi, there exists the idea of silencing those genes that are falsely activated and thus responsible for diseases. Such approaches are still in their infancy, however. Thomas Meyer of the Max Planck Institute for Infectious Biology in Berlin elaborated on the possibility of fighting infectious diseases, for example chlamydia infections.

Dr. Hans-Peter Vornlocher of Alnylam Europe in Kulmbach presented first successes. The intranasal application of siRNAs in the treatment of mice infected with the respiratory syncytial virus (RSV) is already effective?even more effective than the use of monoclonal antibodies. According to Vornlocher, it might be possible to start clinical studies already in 2006. RSV infections are relatively frequent, especially in little children.

Moreover, Alnylam researchers have their sights set on neuronal diseases, metabolic disorders or cancer. Potential siRNA candidates for the down-regulation of specific genes are quickly found?and have been commercially available for a long time. The bigger problem is how to get these molecules to their target site. Here, the researchers work on stabilizing couplings with appropriate carrier molecules. Vornlocher presented one such conjugate. SiRNA bound to cholesterol has been successfully transported directly to liver and intestinal cells to down-regulate the ApoB protein relevant to LDL transport. The goal: to control the blood lipid levels.

But RNAi therapy might not work quite as smoothly as that. Since one siRNA potentially is able to switch off several mRNAs (because the complement of their relatively short base sequence may be found on several mRNAs), every therapeutically applied siRNA might also entail side effects. At the same time, however, there are always several siRNAs to attack a certain mRNA (they simply attack at different positions of the mRNA sequence). According to Tuschl, such mix of siRNAs would be a good way to “dilute” the side effects, since each siRNA is likely to have other off-targets.

Another aspect of therapeutic use was brought up by Ronald Plasterk: He was able to show with roundworms of the C. elegans species that the downregulation of certain genes is also transmitted to the next generation?consistently through many generations and independently of dosage. Those planning to use RNAi as a therapy should also deal with this possibility, Plasterk emphasized. This consideration, however, was put into perspective during the ensuing discussion: Thomas Tuschl, for example, noted “that the human genome lacks such RNA-dependent polymerases that are involved in this process.” This makes the transmission to subsequent generations unlikely.

In the meantime, the so-called microRNAs (miRNAs) have become another focus of RNAi research. MicroRNAs are small RNAs, which are encoded in the DNA and are formed by the cells themselves. They also downregulate genes, but in contrast to siRNAs they only intervene at the moment of translation, i.e. of mRNAs into proteins. More than 500 such miRNAs are already known.

Among the speakers in Berlin was the discoverer of the first miRNA, Victor Ambros of the Dartmouth Medical School in Hanover, New Hampshire. In Berlin, he mentioned the interesting findings that approximately 30 percent of known miRNAs are conserved across all species boundaries. In part, they have remained completely unchanged, except for a few base sequences changes.

As with proteins, the same is true for miRNAs: Not all miRNAs are expressed in each cell. It is known that different tissues exhibit different miRNA profiles. Ronald Plasterk showed this with the aid of microarray analysis, using as example the zebrafish.

To understand the exact functioning of miRNAs is one of the big challenges today. As Stephen Cohen, who studies RNAi in Drosophila at the European Molecular Biology Laboratory in Heidelberg, emphasized, it is only with a few miRNAs that we know which mRNA they regulate. Most seem to be involved in development processes, while general regulatory processes of the cell are not controlled by miRNAs. On the whole, approximately 30 percent of the Drosophila genetic makeup is regulated by miRNAs. A single RNA can influence more than 100 target genes. Surprisingly, however, the miRNAs are not expressed in those tissues that contain their target genes – a phenomenon called “mutual exclusion.”

Witold Filipowicz of the Friedrich Miescher Institute for Biomedical Research in Basel focused on the still open question at which point of the translation the miRNA acts as inhibitor. From his most recent data he derived the assumption that this happened at the beginning of the translation. Until now, it had also been discussed whether this took place only after the production of the protein.

The symposium provided many answers, but it also became clear that many questions are still open, for example on possible therapies or on the role of miRNAs. The high percentage of younger participants in the symposium demonstrated the appeal of the field for young, emerging researchers. One scientist who has contributed considerably to opening up interesting application possibilities for this aspect of RNA research is Thomas Tuschl. Thus, Witold Filipowicz expressed his particular gratitude to him during his talk: “Without you, Tom, we wouldn’t even be here.”

Prof. Tuschl from the Laboratory of RNA Molecular Biology at The Rockefeller University, New York is awarded the Ernst Schering Prize 2005 for his research on RNA interference.