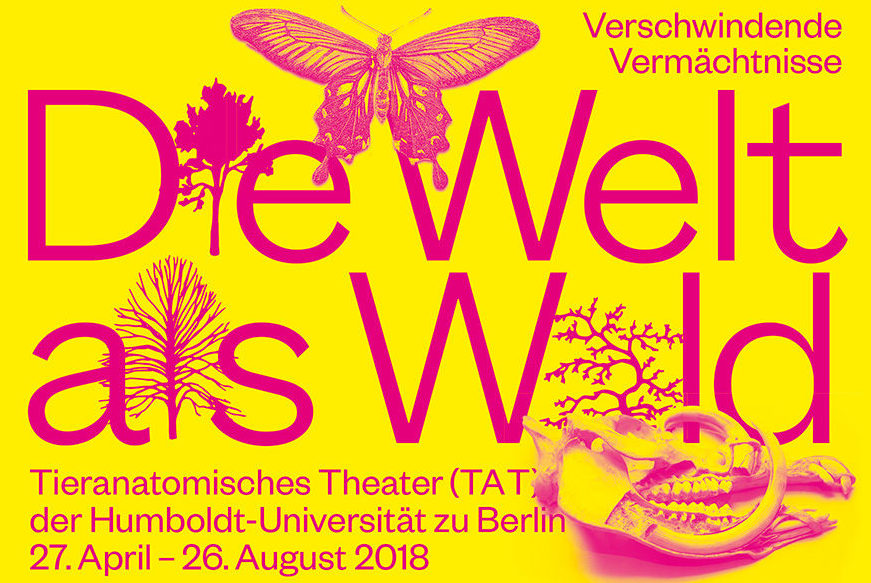 To the accompanying program

The Tieranatomisches Theater in Berlin (TA T) presents the exhibtion “Verschwindende Vermächtnisse: Die Welt als Wald” [Disappearing Legacies: The World as a Forest]. The exhibition departs from the South America and Southeast Asia collecting expeditions of British naturalist Alfred Russel Wallace. One-hundred and sixty years after he deciphered the principle of species evolution during these journeys, the exhibition confronts the destruction of these tropical habitats in the context of deforestation, climate change, and mass extinction. The concept of the project presented in Berlin’s former animal anatomical theater, the Tieranatomisches Theater (TA T) is unique – a hybrid between a historical thematic presentation and a major exhibition of contemporary art critically reflecting natural history through its ties to imperialism, colonial resource extraction, and the valuing of certain knowledges above others.

The centerpiece of the intervention is the presentation of 13 contemporary works of art—including eight works created especially for this project—and botanical and zoological specimens from Humboldt University and the Herbarium of Hamburg University.

Some of these artworks were developed through journeys to Brazil and Indonesia. Spending time on Borneo, Java, and Sumatra, photographer and filmmaker Armin Linke—together with his colleague Giulia Bruno and exhibition curators Anna-Sophie Springer and Etienne Turpin—conducted numerous interviews with local residents, plantation workers, small land holders, environmentalists, government officials, and scientists. The result is a cinematic document that reflects the speed with which Indonesia is currently transforming into a palm-oil nation amid giant peat fires. With her 19-channel video installation To See the Forest Standing, Maria Thereza Alves invites us to listen to the 34 Indigenous clan chiefs, whom she accompanied for one month last summer in Brazil while participating in a workshop on Indigenous agroforestry and resource conservation. Revital Cohen & Tuur van Balen look inward and examine taxidermy birds-of-paradise with piercing X-ray vision, while the automated multimedia installation Extinction Gong by Julian Oliver & Crystelle Vũ translates the IUCN Red List of Endangered Species into an eerie and percussive rhythm in realtime.

Another highlight of the exhibition is the 3D digital rendering of a Sumatran rhino skull, produced in collaboration with Prof. Thomas Kaiser, a mammalogist from Hamburg University, YXLON International, and Volume Graphics. Other media include exclusive screenings of one of David Attenborough’s earliest BBC documentaries and a selection of videos from the ornithologist Ed Scholes (Cornell Lab of Ornithology) and wildlife photographer Tim Laman’s ambitious Bird-of-Paradise Project.

Together, the artworks and assemblages presented in “Verschwindende Vermächtnisse: Die Welt als Wald” renounce a romantic image of untouched nature, and instead critically inquire into the legacies resulting from the relentless destruction of highly complex ecosystems.

The exhibition will be accompanied by a variegated program of guided tours, lectures, screenings, and other evening events.

Verschwindende Vermächtnisse: Die Welt als Wald is a three-part project by Anna-Sophie Springer and Etienne Turpin. The travelling exhibition is realized by Centrum für Naturkunde at the University of Hamburg, where it was on in the fall of 2017. In 2018, adapted iterations are presented from 27 April to 26 August 2018 at the project partner, Tieranatomische Theater at Humboldt University in Berlin, and from 19 October until 14 December 2018 at the Zentralmagazin Naturwissenschaftlicher Sammlungen of the Martin-Luther-Universität Halle-Wittenberg in Halle/Saale. The exhibition cycle is a cooperation with the Schering Stiftung and the Goethe-Institut. The project is funded by the German Federal Cultural Foundation.

The exhibition confronts the destruction of tropical habitats in the context of deforestation, climate change, and mass extinction.