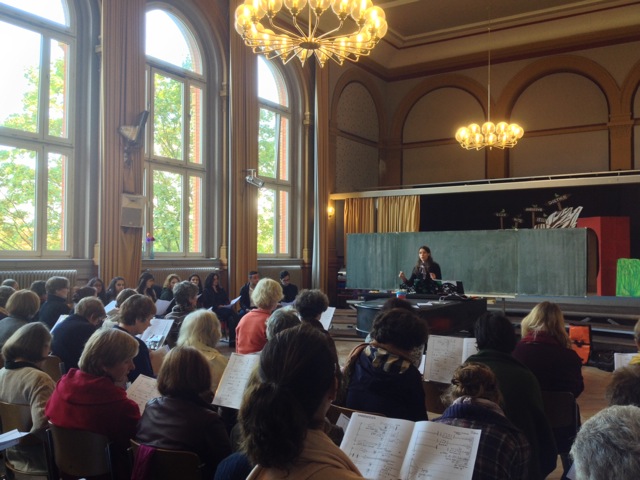 29.09.2013, Berlin | When the Berliner Cappella choir kicks off its concert at the Berlin Philharmonic Hall on October 22, 2013, with Franz Schubert’s song “Gute Nacht” (Good Night), for many school students it will be the highlight of their year-long examination of Schubert’s “Winterreise” (Winter Journey). For months, the young people discussed, wrote, composed, and rehearsed under the guidance of writer Laura Lichtblau and composer Oliver Korte. The concert program – directed by Kerstin Behnke – now presented by Berliner Cappella features seven new works that have been written and composed by the students as part of this educational project.

The title, “A Dialogue with the ‘Winterreise,’” resonates with everybody involved in the project: not just in terms of the concert program, which alternates songs from Schubert’s “Winterreise” with new compositions, but above all in terms of the work with the ninth-graders. Based on an analysis of the text and the original score of the “Winterreise,” which took place in class, interested students met in workshops to work on a libretto and composition. They decided to give voice to, and put the focus of attention on, the “Winterreise”’s alleged “minor characters” such as, for example, the girl, the hurdy-gurdy man, the crow or the shadow of the moon.
The composer Oliver Korte sums up his work with the students as follows: “I spent countless hours with every small group. (…) The students have learned a tremendous amount about musical notation. (…) They also learned a lot about a choir’s technical possibilities and limitations. When singing their choral parts, the students, for example, gained first-hand knowledge about the limits of the vocal range or about phrase lengths, before singers literally run out of breath.”
The project “Raise Your Voice! – Dialogue with the ‘Winterreise’” integrates students from different cultural and social backgrounds and offers an excellent opportunity to introduce them to contemporary and classical choral music and to get them excited about music. In addition, the experience that the concert choir takes them and their ideas seriously and that their contributions are honored by a public performance boosts the young people’s self-confidence. For this reason, the Schering Stiftung enthusiastically supports this project.

A project in the “Raise Your Voice!” series of Berliner Cappella e. V.

The project is supported by the PwC Foundation and the Schering Stiftung.