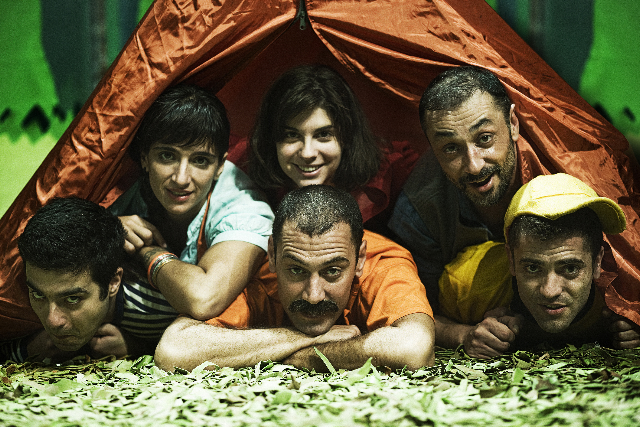 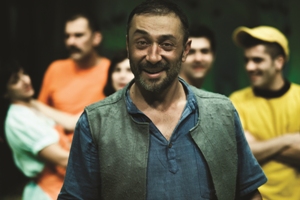 25.08.2014, Berlin | On September 20, 2014, the GRIPS Theatre celebrates its 40th anniversary on Hansaplatz with a big party featuring a Greek guest performance of the play “A Party at Nourian’s” (with German surtitles). The play about the encounter of the German Müller family with father and son Papadakis from Greece at a campsite in Berlin became a milestone of GRIPS history and a worldwide success. The Greek adaptation of the GRIPS classic shows how xenophobia and racism infiltrate society as a result of the severe social and financial crisis.

Forty years ago, the GRIPS Theatre moved to the remodeled cinema Bellevue on Hansaplatz and opened its first permanent venue with the play “Ein Fest bei Papadakis” (A Party at Papadakis’), written by GRIPS founder and author Volker Ludwig. At the time, GRIPS was the first theatre to address the issue of the emerging xenophobia. With its educational humor and concluding song, “Wir sind Kinder einer Erde” (We Are All Children of the Earth), the play went on to become a worldwide success. The Greek guest workers became Moroccans in Paris, Indians in London, Vietnamese in Sydney, Russian immigrants in Tel Aviv, and Iranian emigrants in Athens.

Three years ago, the Athens-based Poreia Theatre produced Volker Ludwig’s play under the title “A Party at Nourian’s.” In an artistically outstanding production and adapted to the current situation in Greece, it demonstrates impressively how the severe social and financial crisis stokes xenophobia and racism in Greek society. With his rousing condemnation of xenophobia, actor and director Vassilis Koukalani, who is well-known in Greece, has the finger on the pulse of the people: the production has been playing to sold-out audiences in Athens for two years.

To mark its anniversary, the GRIPS brings its first premiere play back home, not only to provide Berliners with heart-rending insights into the enormous everyday problems in Greece, but also to express solidarity with those who show the courage to fight racist people, media, and political parties. The Schering Stiftung has repeatedly supported the GRIPS Theatre since its establishment as an outstanding site of cultural education for children and youth, and feels strongly committed to the emancipatory children’s theatre that has employed comedic methods and been an international and vibrant undertaking since day one. Congratulations on its 40th anniversary on Hansaplatz!

By Vassilis Koukalani, based on “Ein Fest bei Papadakis” by Volker Ludwig
Guest Performance of the Poreia Theatre, Athens
In Greek with German translation