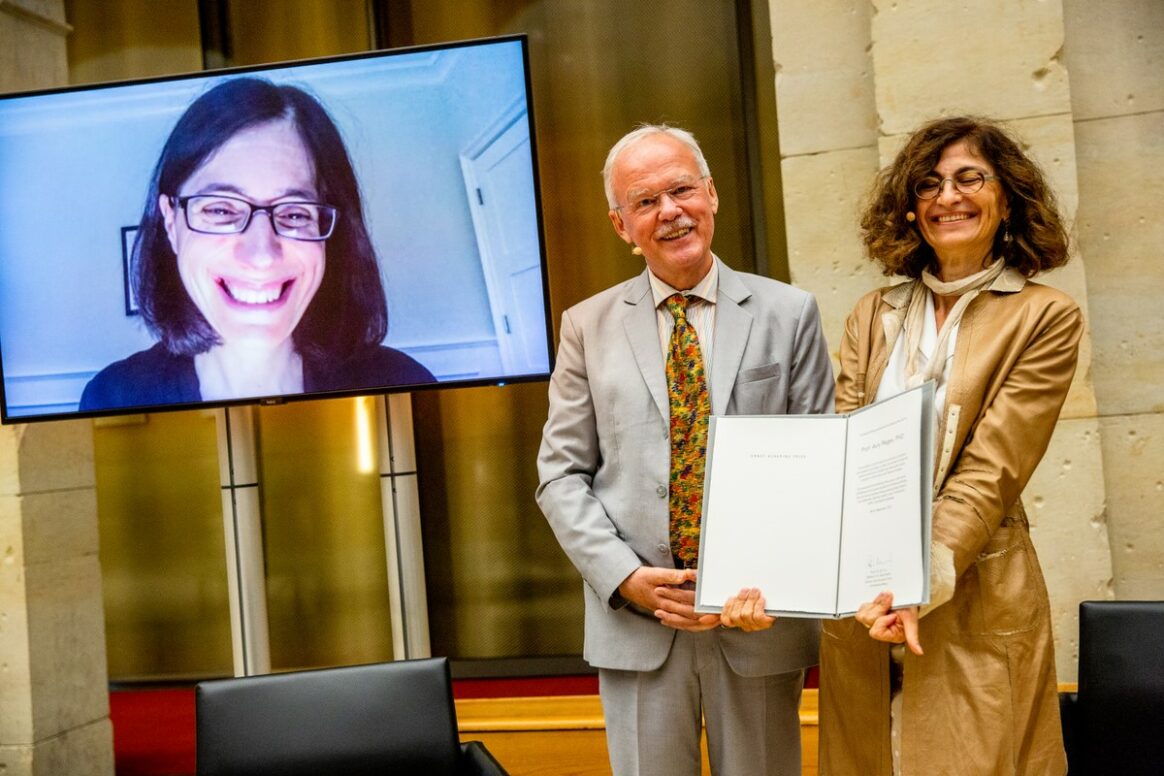 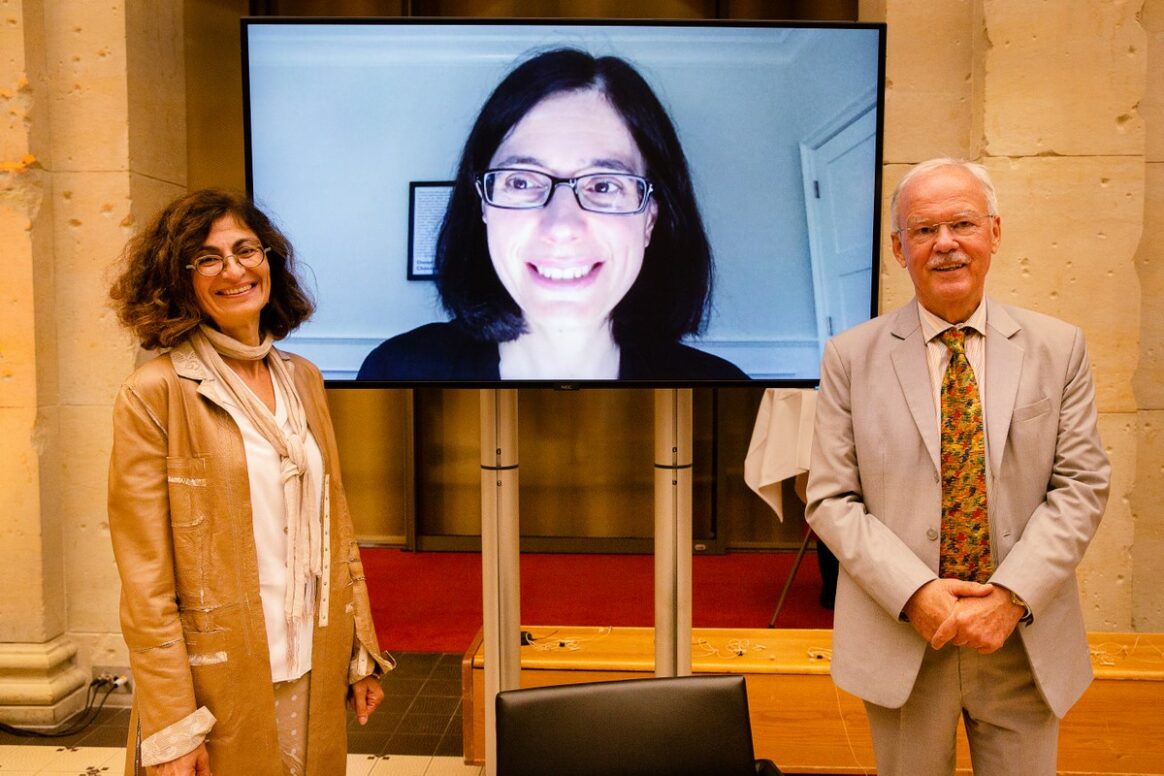 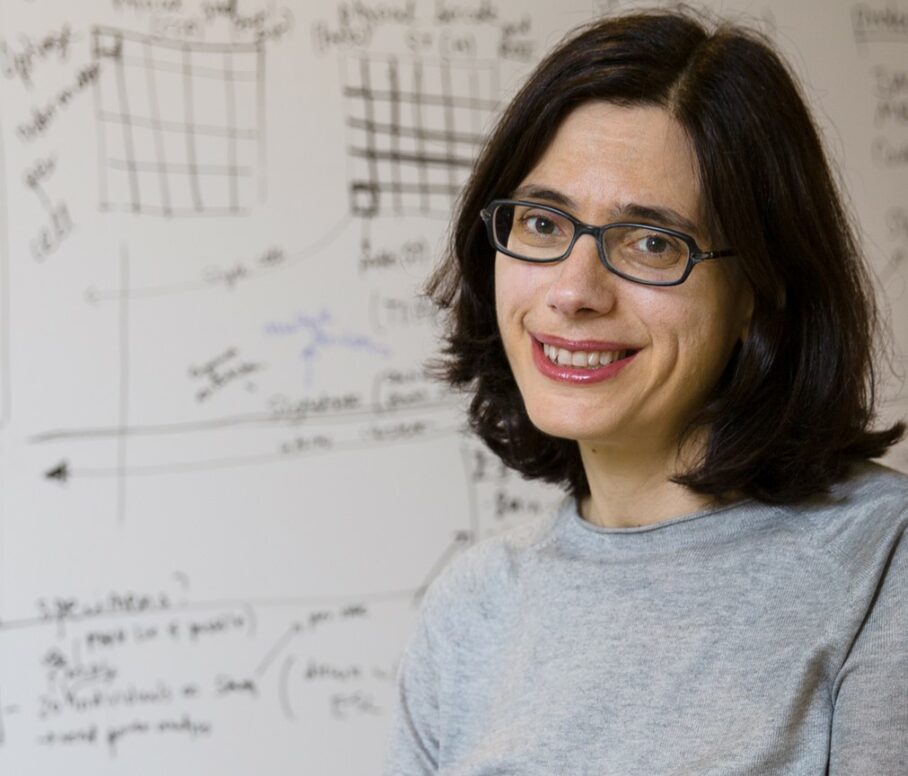 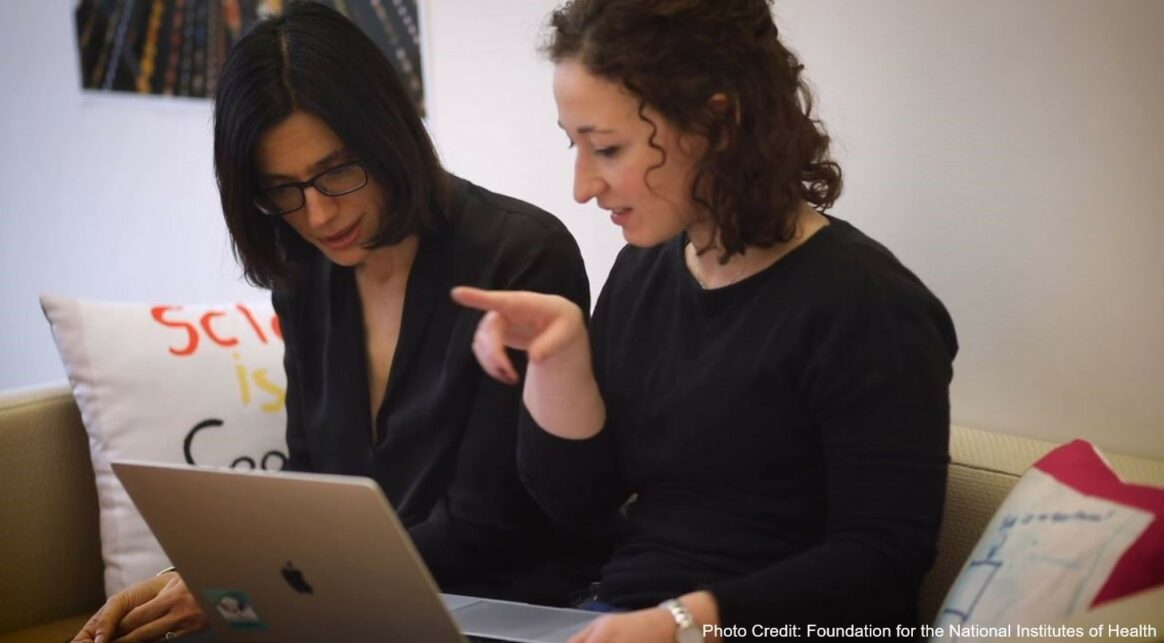 Prof. Regev and a team member
Photo: Foundation for the National Institutes of Health

Professor Aviv Regev, PhD, is Executive Vice President and Global Head of Genentech Research and Early Development at the biotechnology company Genentech, a member of the Roche Group. Prior to Genentech, Regev served as founding director of the Klarman Cell Observatory at the Broad Institute, Professor of Biology at MIT, and Investigator of the Howard Hughes Medical Institute. She is a founding co-chair of the Human Cell Atlas. Aviv Regev has pioneered the development of foundational experimental and computational methods in single-cell genomics and is a leader in deciphering molecular circuits that govern cells, tissues, and organs in health and disease. Among many honors, she is an elected member of the National Academy of Sciences and the National Academy of Medicine in the United States.

Aviv Regev was nominated for the Ernst Schering Prize by Professor Geneviève Almouzni, PhD, Honorary Director and Head of the Chromatin Dynamics team at the Research Center of the Institut Curie, Paris. Geneviève Almouzni, who will lead a conversation with Aviv Regev about her research at the award ceremony, said: “Aviv Regev is one of the leading scientists of her generation. Her energy and her curiosity are infectious, and she inspires younger generations thanks to her leadership and mentoring skills. Her contributions to the field of single-cell genomics, including the establishment and inspiration of the international Human Cell Atlas community, make her an ideal choice for the Ernst Schering Prize.”

Schulfarm Insel Scharfenberg, Berlin-Tegel (not open to the public) 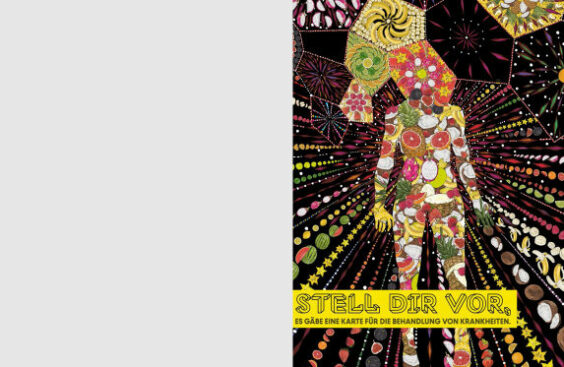 Imagine there was a Map for the Treatment of Diseases

Aviv Regev and Judith Feucht, this year’s recipients of our science prizes, talk, among other things, about how basic research can be successfully translated into clinical application.

Aviv Regev will give a keynote lecture on the occasion of the award of the Ernst Schering Prize.

at MPI for Melecular Genetics

Chairman of the Foundation Council of the Schering Stiftung, Founding Director of the Max Planck Institute for Infection Biology

Pico Caroni has been a senior group leader at the Friedrich Miescher Institute (FMI) for Biomedical Research and a professor of neurobiology at the Biozentrum/The Center for Molecular Life Sciences at the University of Basel since 1995. He studied biochemistry at ETH Zürich and subsequently worked on regeneration in the central nervous system in Martin Schwab’s lab at the Brain Research Institute of the University of Zurich. Since 1989, Caroni has been a researcher at the FMI – first as a junior group leader – studying the plasticity of defined neuronal circuits and systems. He is interested not only in the fundamentals of learning and memory but also in the impact of gene mutations on the circuits and the resulting mental disorders.

Director of the Institute of Biochemistry, Charité Berlin

Britta Eickholt has been Professor of Molecular and Cellular Biochemistry at the Charité - Universitätsmedizin Berlin since 2011. She received her doctorate in 1998 at Guy's Hospital in London. In 2001, she received a lectureship at King's College London and started her own research group at the MRC Center for Developmental Neurobiology. She was appointed Professor of Molecular Neurobiology at King's College in 2010, before her move to Berlin in 2011. Her research focusses on the signaling mechanisms that regulate dynamic processes of the cytoskeleton in neuronal cells.

Carl-Henrik Heldin has, since 1992, been professor in Molecular Cell Biology at Uppsala University, Sweden. Between 1986 and 2017, he was the Branch Director of the Ludwig Institute for Cancer Research in Uppsala. Professor Heldin is the chair of the Boards of the Nobel Foundation, the Science for Life Laboratory, and the European Molecular Biology Organization. His research interest is related to the mechanisms of signal transduction by growth regulatory factors, as well as their normal function and role in disease. An important goal is to explore the possible clinical utility of signal transduction antagonists.

Professor for Biochemistry at the Freie Universität Berlin

Petra Knaus received her Ph.D. at the Center for Molecular Biology in Heidelberg in 1991. As a Research Fellow and Associate, she did her Postdoctoral Training at the Whitehead Institute for Biomedical Research, USA, until 1996. After her return to Germany, she was Junior Group Leader at the Biocenter in Würzburg. There she established her own lab with a focus on BMP receptor biology and signal transduction. In 2004 she became Full Professor for Biochemistry – Signaltransduction at the Institute for Chemistry and Biochemistry at the Freie Universität Berlin. In 2010 she received a W3 Professorship for Biochemistry – Signaltransduction and Regeneration at the Freie Universität Berlin and Charité. The interest of the Knaus lab is to understand the molecular mechanism of BMP signal transduction, and to identify common and distinct mechanistic concepts in different cell and tissue environments.

Director at the Max Planck Institute for Biophysics in Frankfurt/Main

Hartmut Michel studied Biochemistry at the Universities of Tübingen and Munich. He completed his doctoral degree at the University of Würzburg in 1977 and habilitated in 1988 at the University of Munich. Since 1987 he is Director at the Max Planck Institute for Biophysics at Frankfurt/Main, where he leads the Department for Molecular Membrane Biology. In 1988, Hartmut Michel was awarded the Nobel Prize for Chemistry, together with Johannes Deisenhöfer and Robert Huber, for their investigation of the molecular structure of the photosynthesis reaction center in the rhodopseudomonas viridis bacterium.