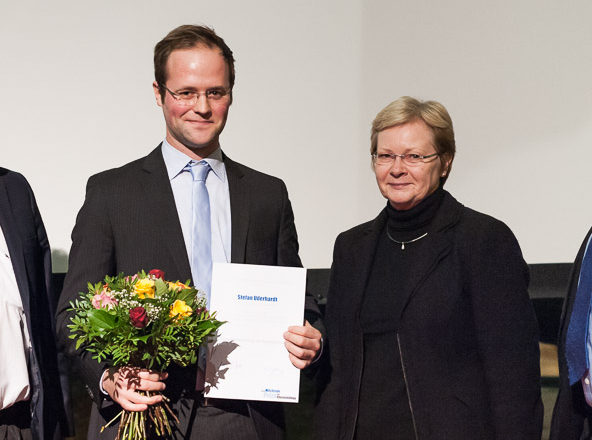 Dr. Stefan Uderhardt is the recipient of the 2012 Avrion Mitchison Prize for Rheumatology for his work, “12/15-lipoxygenase orchestrates the clearance of apoptotic cells and maintains immunologic tolerance.”

Uderhardt, born in 1984, studied medicine at the University of Erlangen-Nuremberg from 2004 until 2010. From 2008 until 2011, he worked on his dissertation in the lab of Dr. Gerhard Krönke at the Institute for Rheumatology and Clinical Immunology at the University’s Medical Clinic 3, writing his thesis on the “Molecular Regulation of Bone Remodeling in Inflammatory Arthritis.” Since 2010, he has been a resident physician and research associate at the Medical Clinic 3.

At the award ceremony, Dr. Stefan Uderhardt will present his current research, “12/15-lipoxygenase orchestrates the clearance of apoptotic cells and maintains immunologic tolerance”.

“One major task of the immune system is to efficiently eliminate invading pathogens and to maintain immunological self-tolerance at the same time. However, during inflammation and consequent tissue damage, the innate immune system is challenged with both pathogens and dying cells. Defective clearance of apoptotic cells has emerged as a crucial factor in the development of autoimmune diseases. The ingestion and processing of self-antigens derived from apoptotic cells by inflammatory antigen-presenting cells could provoke an unwanted immune response and could result in a break of self-tolerance leading to autoimmunity. Therefore, there must be mechanisms, especially under inflammatory conditions, which regulate a selective cellular sorting of different antigens into differentially-activated phagocyte compartments.

Our data point towards a so far unrecognized role for enzymatic lipid oxidation during the maintenance of self-tolerance and uncovered a mechanism by which the selective uptake of antigens of different origins into differentially activated phagocyte subsets is orchestrated in a cell- and context-specific manner.”

On December 4th, 2012 at 6.10 p.m. the Albrecht Hasinger Lecture is hold by Prof. Mark J. Shlomchik from Yale University School of Medicine on “Lupus Pathogenesis: B vs. DC and Other NET Results”.