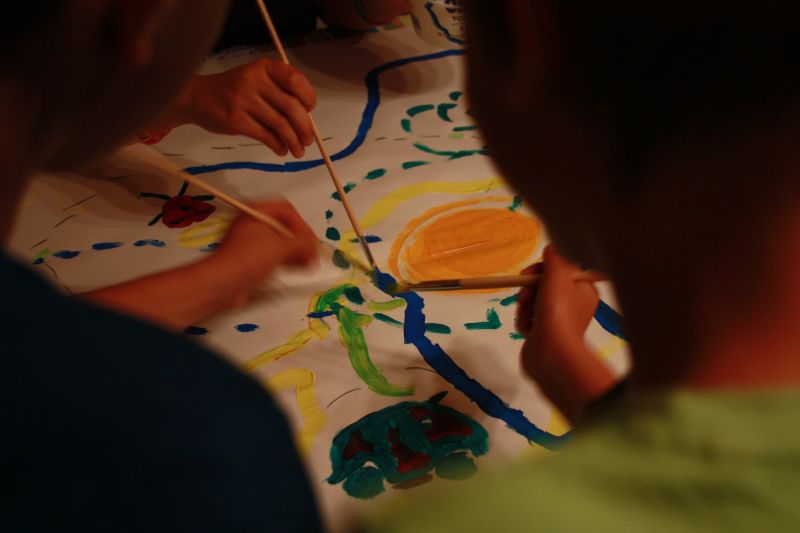 One should know what one is looking for! – Youth theater project in Hellersdorf

One should know what one is looking for! – Youth theater project in Hellersdorf

09.01.2015, Berlin | In November 2014 the Theater o.N. hosted the premiere of another play created in cooperation with young people aged 12 to 17 from Berlin-Hellersdorf who also star in the play. In “One should know what one is looking for!,” the protagonists talk about their personal lives, about their prospects for the future or situations where there are none, and about people who are searching for something. On January 16 and 17, 2015, the play will staged again at the Theater o.N..

Already in their previous work with children and youth from the Berlin district of Hellersdorf (including “hell erzählen,” “Der Teufelsschatz,” “HerzMonster”), the project managers of the Theater o. N. were able to experience the positive effect the theater work has on the personal development of children from difficult social backgrounds. The success of the play “hell erzählen,” which was invited to the Theatertreffen der Jugend in 2013 and thus selected as one of the eight best stage productions in Germany, has boosted the self-confidence of the young actors. With the play “One should know what one is looking for!,” the Theater o.N. in 2014 builds on this promising development and wants to continue the project in 2015. Since a fundamental component of working with children and young people in an environment of trust lies in the continuity of the projects as well as in dependable, stable relationships, the Schering Stiftung has supported the project work since 2010.

Through intensive theater work, the team of the drama educator and director Cindy Ehrlichmann has repeatedly taken young people on a voyage of discovery. In the beginning was the search – the search for a new group, a new topic, a new form. Thus the search itself became the starting point for a new play where five people set out to find out something – about searching, about finding, about life. Perhaps.

“One should know what one is looking for!”

Youth theater project of the Theater o.N. – by and with young people from Hellersdorf

With: Ismael, Lara, René, Pia, Rani, and others