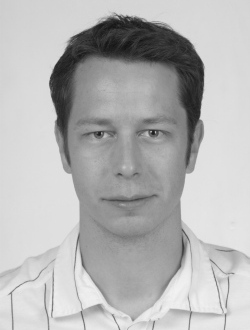 Dr. Tom N. Großmann from the Institute of Chemistry at the Humboldt University of Berlin is awarded the Schering Prize 2008 for his research on “Template-catalyzed reactions according to the principle of native chemical ligation – ligation and transfer reactions for the sensitive and selective detection of DNA and RNA sequences”.

Dr. Tom N. Großmann receives the 2008 Schering Prize for his dissertation on “Template-catalyzed reactions according to the principle of native chemical ligation – ligation and transfer reactions for the sensitive and selective detection of DNA and RNA sequences,” which he completed in the group of Prof. Dr. O. Seitz at the Humboldt University’s Institute of Chemistry in Berlin-Adlershof from 2004 until 2008, developing a signal-amplifying method for molecular genetic diagnostics.

Deoxyribonucleic acid (DNA) is the molecular carrier of genetic information. Even small changes in genetic information can pose serious threats to human health. Many diseases such as Alzheimer’s and Parkinson’s disease as well as diverse cancers are inherited. Even infectious diseases can be recognized by means of characteristic gene segments. The close connection between genetic information and disease has lead to a constantly growing need for new methods that allow the selective detection of disease-specific DNA as well as RNA sequences, which typically occur in minute amounts. Common methods of DNA detection draw upon the polymerase chain reaction (PCR) in order to make multiple copies of the DNA segment of interest. This very practical method is, however, time consuming and requires sophisticated equipment. It is for this reason that many researchers seek for alternative methods where the presence of DNA directly triggers the amplification of a signal rather than the amplification of the DNA itself.

One way to achieve PCR-less amplification takes advantage of the catalyzed formation of signaling molecules. In such an approach, the target itself acts as a catalyst for a chemical reaction by aligning the functional groups of modified oligonucleotides. This alignment allows the acceleration of reactions which proceed very slowly in the absence of the template. The formation of the reaction product serves as an indicator for the presence of the target sequence. Within the framework of the thesis a reaction was developed that allowed the transfer of a reporter group from a donating to an accepting oligonucleotide probe. The transfer reaction was used to detect DNA and RNA target sequences. This approach allowed the detection of carcinogenic DNA sequences and RNA segments of the HI virus. A variety of reactive, fluorescence modified oligonucleotide probes was synthesized, which, after binding of the target DNA segment, reacted to form reaction products that showed new fluorescence properties. In an alternative format enzymatic reactions were used to detect the presence of the formed products. It was shown that a single gene segment catalyzed up to 400 signal forming reactions. This enabled the detection of very minute amounts (500 attomol) of target sequence by using a procedure which is simpler than the PCR.

On December 4th, 2009 at 4 p.m. the Bohlmann Lecture is hold by Prof. Ertl, Nobel laureate in Chemistry 2007 on “Elementary Steps in Heterogeneous Catalysis".