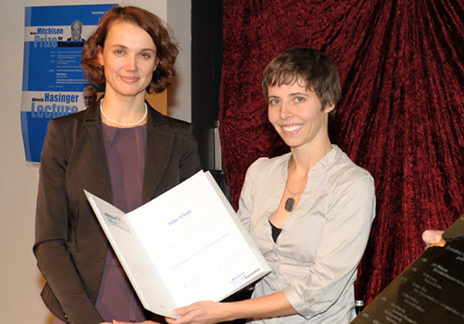 Dr. Edda Schulz studied Biochemistry at Eberhard-Karls-University, Tübingen. From 2005 to 2009, she completed her dissertation on „experimental and mathematical analysis of regulatory networks in T-helpertype I (Th1) lymphocytes” under the supervision of Prof. Thomas Höfer, Humboldt-University, Berlin, and Prof. Andreas Radbruch, German Rheumatism Research Center, Berlin. In 2008, she worked as a post-graduate researcher at HarvardMedicalSchool, Boston, USA. Since 2010, she has been a postdoc in the research group „Mammalian Developmental Epigenetics” at Institut Curie, Paris, France.

Dr. Edda Schulz will receive the Avrion Mitchison Prize 2010 of the GermanRheumatismResearchCenter in Berlin. At the award ceremony on November 30, she will give a talk on “Sequential polarization and imprinting of type 1 T helper lymphocytes by interferon-g and interleukin-12“.

Schulz about her research:

T-helpertype I (Th1) lymphocytes play a central role in the mammalian adaptive immune response against intracellular pathogens. When activated inappropriately, however, they contribute to autoimmune diseases. Although transcription factors and cytokine signals controlling Th1 differentiation have been studied extensively, the exact contribution of each factor remained unclear. It had been known for long that the Th1 master transcription factor T-bet can be induced by the cytokine interferon-g (IFN-g) in an autocrine manner. However, it had remained puzzling, why IFN-g cannot induce Th1 differentiation, which requires another cytokine, interleukin-12 (IL-12). To understand how the various players function together as a regulatory network, a systems biology approach was chosen.

On November 30th, 2010 at 6.10 p.m. the Albrecht Hasinger Lecture is hold by Prof. Tak (University Amsterdam) on „Rheumatoid arthritis: from pathogenesis towards prevention of immune-mediated inflammatory disease“.